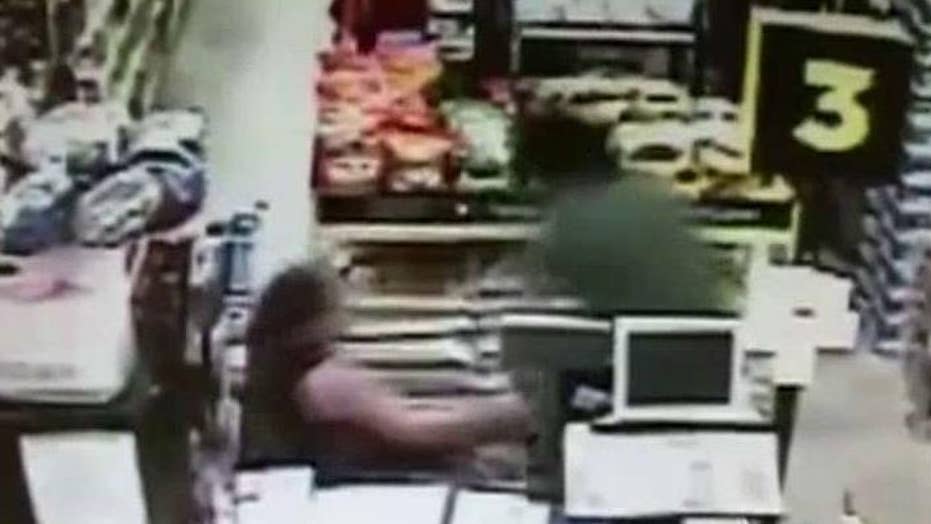 Mother fights off would-be kidnapper to save daughter

A Florida mother wrestled her own daughter from the arms of a would-be kidnapper inside a store Tuesday morning before an off-duty sheriff's deputy arrested the fleeing suspect.

Authorities said Craig Bonello, 30, tried to grab the 13-year-old who was shopping with her mother at a Dollar General store in Hernando.

Surveillance video shows Bonello attempting to run out of the store with the girl, but the teen's mother caught up and a tug-of-war ensued.

Bonello eventually let go of the girl and ran toward the exit just as an off-duty Citrus County sheriff's deputy was getting out of his patrol car to go in the store. After being alerted by the store's manager,  Deputy Jonathan Behnen pulled his car around to block Bonello's vehicle in the parking lot before ordering the suspect out of his car at gunpoint.

"In my 10 years on the road I have never seen anything like this," Sgt. Craig Callahan told Fox13. "He truly intended to abduct this child right in front of everyone in the store."

Bonello faces charges of kidnapping and child abuse. He has a long criminal history and was most recently arrested for trespassing in February. Bonello was also charged with felony aggravated battery on a law enforcment officer in 2009.

We are very fortunate our deputy was there as quickly as he was. We are very fortunate that the mother had that motherly instinct and did what she did." Sgt. Callahan said. "She may have saved her daughter's life today. I don't exactly know a motive, but I know it wasn't a good one."

Neither the teen nor her mother was injured in the incident.