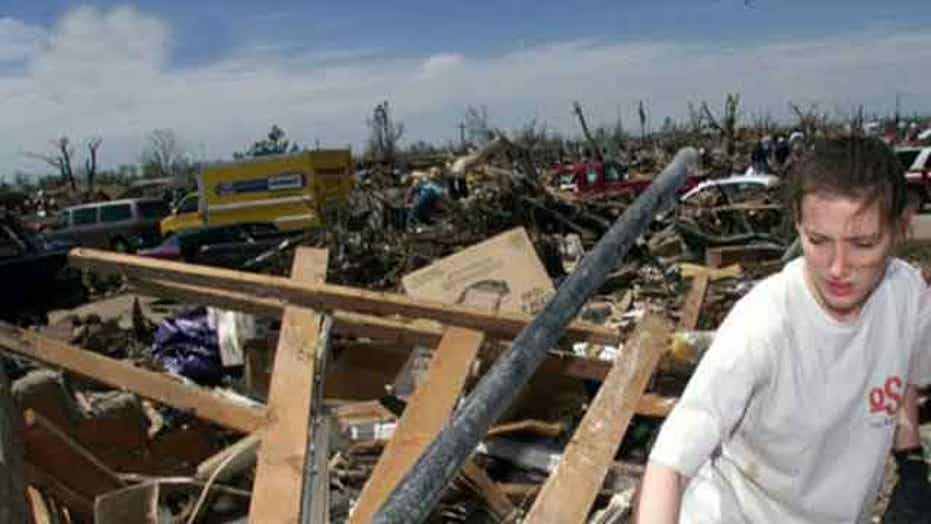 Moore, Oklahoma resident: We will rebuild

The mayor of the Oklahoma City suburb that was devastated by a massive tornado Monday says he wants safe-room shelters built in all new homes.

Moore Mayor Glen Lewis, on Wednesday, said  he will propose an ordinance in the next couple of days at the Moore City Council that would modify building codes to require the construction of reinforced shelters in every new home in the town of 56,000.

Lewis says he is confident he'll get the four votes needed on the six-member council. The measure could be in force within months.

Underground safe rooms are typically built below garages and can cost around $4,000.

Plaza Towers Elementary School and Briarwood Elementary School, both of which were hit in the tornado, did not have reinforced storm shelters or safe rooms, said Albert Ashwood, the director of the Oklahoma Department of Emergency Management. Seven children were found dead at Plaza Towers.

More than 100 schools across the state do have safe rooms, he said, explaining that it's up to each jurisdiction to set spending priorities.

But Ashwood said a shelter would not necessarily have saved more lives at Plaza Towers.

"When you talk about any kind of safety measures ... it's a mitigating measure, it's not an absolute," he told reporters. "There's not a guarantee that everyone will be totally safe."

Residents of Moore, Okla. are now returning to rubble after the tornado decimated the town Monday afternoon, but some homes have been targeted by suspected looters.

Moore police arrested two unidentified people after a homeowner said they were picking around the rubble of his house, News9.com reports.

The homeowner said the suspects told him they were looking for survivors, but officials found a bag full of items allegedly stolen from homes in the area.

Red Cross President Gail McGovern said in a press conference Wednesday that there will be a big push this weekend on distributing items like tarps, mops and buckets, that will allow residents of Moore to sift through their belongings.

“I want to thank the American public for their support of the Red Cross,” she said.

“One of the things that has impressed me so much is the strength and resilience of the Oklahomans that have been affected by this disaster,” she said. “At some point the cameras will leave…but we will be here to stay until the recovery is complete.”

Oklahoma Gov. Mary Fallin said the state "received phone calls from all over Oklahoma, and certainly throughout the United States and some from other countries,".

"We've also seen a great outpouring of support from various charities, entities, individuals and corporations," she said. "We are very grateful for your support'"

State health officials said several vendors have set up in Moore to help provide food to residents and workers in the area, but some are failing to follow basic health guidelines.

Cleveland County Health Department officials say there have been reports of numerous vendors in the area giving away or selling food for people living and working in the area.

The director of the state health department's consumer health service, K.C. Ely, says that while they appreciate that people want to help, they are finding "multiple food safety hazards."

After a full day of searching for survivors in rubble on Tuesday, authorities believe most of the survivors has been accounted for, but six people are still being sought.

"I'm 98 percent sure we're good," Gary Bird said at a news conference with the governor, who had just completed an aerial tour of the disaster zone Tuesday.

"As far as I know, of the list of people that we have had that they are all accounted for in one way or another," added Oklahoma County Commissioner Brian Maughan, according to Reuters.

The Oklahoma state medical examiner's office says the death toll is at least 24, with at least ten of the dead being children. More than 200 people were treated at area hospitals. An earlier death toll was set at 51, but the medical examiner said some victims may have been counted twice in the confusion.

Hornsby was one of the victims at Plaza Towers Elementary. Her father Joshua raced to the school Monday in an attempt to save her, but arrived ten minutes late, CBS News reports.

"It's like taking a piece out of my heart and just like stomping on it ," said her grandmother, Yolanda Hornsby. "And to come to terms with that -- that I won't be able to spend Sunday dinners with her, no more times at church with anymore, all of that stuff that we did together. And the smile."

Search-and-rescue teams had concentrated on Plaza Towers Elementary, where the storm ripped off the roof, knocked down walls and destroyed the playground as students and teachers huddled in hallways and bathrooms.

Several students were pulled alive from under a collapsed wall and other heaps of mangled debris. Rescue workers passed the survivors down a human chain of parents and neighborhood volunteers. Parents carried children in their arms to a triage center in the parking lot. Some students looked dazed, others terrified.

After hearing that the tornado was headed toward another school called Briarwood Elementary, David Wheeler left work and drove 100 mph through blinding rain and gusting wind to find his 8-year-old son, Gabriel. When he got to the school site, “it was like the earth was wiped clean, like the grass was just sheared off, ” Wheeler said.

Eventually, he found Gabriel, sitting with the teacher who had protected him. His back was cut and bruised and gravel was embedded in his head — but he was alive. As the tornado approached, students at Briarwood were initially sent to the halls, but a third-grade teacher — whom Wheeler identified as Julie Simon — thought it didn't look safe and so ushered the children into a closet, he said.

The teacher shielded Gabriel with her arms and held him down as the tornado collapsed the roof and starting lifting students upward with a pull so strong that it sucked the glasses off their faces, Wheeler said.

”She saved their lives by putting them in a closet and holding their heads down,” Wheeler said.

The National Weather Service gave the twister a rating of EF5 on the Enhanced Fujita Scale for wind speed and breadth, and experts say it released an amount of energy that dwarfed even the power of the atomic bomb that leveled Hiroshima.

EF5 tornadoes are the strongest tornadoes and have the most violent winds on Earth, more powerful than a hurricane. The Moore tornado's wind speeds were estimated at between 200 and 210 mph.

The Oklahoma Insurance Department says a preliminary estimate suggests the cost of damage from the tornado could be more than $2 billion.

The five ranking puts the tornado in the same class as the deadliest in U.S. history, which hit Joplin, Mo., in 2011, killing 158 and injuring hundreds more.

Several meteorologists consulted by the Associated Press estimated the tornado's energy released during the storm ranged from 8 times to more than 600 times the power of the Hiroshima bomb, with more experts at the high end. Their calculations were based on energy measured in the air and then multiplied over the size and duration of the storm.

"An EF-5 is as bad as it gets," said Joe D'Aleo, co-chief forecaster for WeatherBell Analytics. "It's equivalent to a Category 5 hurricane. It means winds were more than 200 miles per hour, and it means you have to be underground, because there will be nothing left above ground."

Such devastation was seen in Moore Tuesday, as emergency crews struggled to navigate devastated neighborhoods because there were no street signs left. Some rescuers used smartphones or GPS devices to guide them through areas with no recognizable landmarks.

Fallin said many houses and buildings have been reduced to "sticks and bricks." Homes were seen crushed into piles of broken wood. Cars and trucks were left crumpled on the roadside.

“Our prayers are with the people of Oklahoma today,” President Obama said in a Tuesday news conference, expressing gratitude for the residents and first responders who are assisting with the search and rescue efforts, and teachers who shielded their children as the tornado hit two schools.

“The people of Moore should know that their country will remain on the ground there for them, and be beside them as long as it takes,” Obama said. “Oklahoma needs to get everything that it needs right away.”

Fallin announced that the White House approved Oklahoma's request for disaster assistance for five counties: Cleveland, Lincoln, McClain, Oklahoma and Pottawatomie. Additional damage assessments could be added to the declaration.

Fallin also urged Oklahomans to call 1-800-621-FEMA for help, and said the state set up a website, www.okstrong.ok.gov, for information on available emergency services.

A map provided by the National Weather Service showed that the storm began west of Newcastle and crossed the Canadian River into Oklahoma City's rural far southwestern side about 3 p.m Monday. When it reached Moore, the twister cut a path through the center of town before lifting back into the sky at Lake Stanley Draper.

Monday's powerful tornado loosely followed the path of a killer twister that slammed the region in May 1999; the storm then had winds clocked at 300 mph.

Kelsey Angle, a weather service meteorologist in Kansas City, Mo., said it's unusual for two such powerful tornadoes to track roughly the same path. It was the fourth tornado to hit Moore since 1998. A twister also struck in 2003.

Lewis, who was also mayor during the 1999 storm, said the city was already working to recover.

“We've already started printing the street signs,” he said. “It took 61 days to clean up after the 1999 tornado. We had a lot of help then. We've got a lot of help now.”