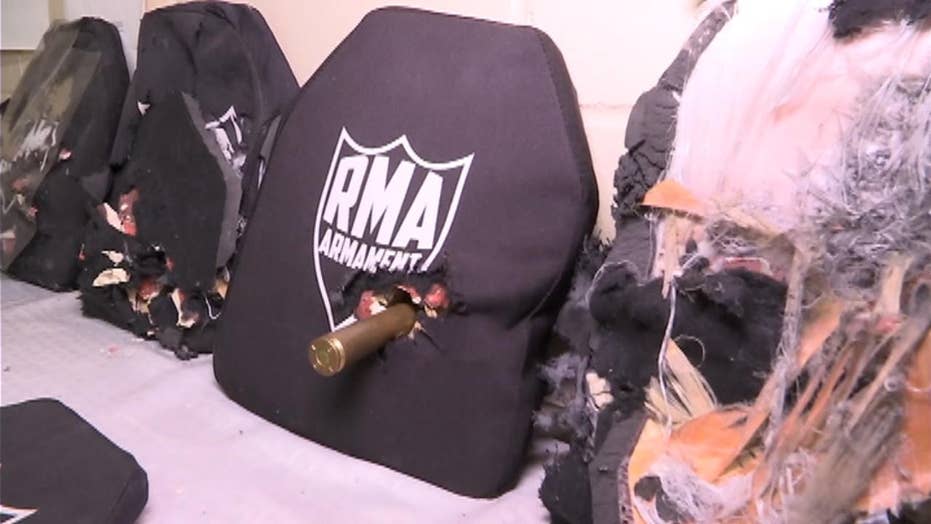 Strong enough to withstand multiple bullet rounds, RMA Armament’s unique body armor vest is helping to protect police and the military around the globe. FOX News’ Todd Piro gets a first-hand look at the bullet-proof vest and what makes it so special.

The founder of RMA Armament, Inc. in Centerville, Iowa, maker of bullet-proof vests, lost a friend in Iraq in 2005. His friend died even though he was wearing body armor. Since then, the goal of the former Marine and police officer was to make a product better than those on the market.

The difference is in the technology. While most vests “spider-web” when hit, destroying the integrity of the vest going forward, RMA’s vests isolate the bullet’s impact to the area where it hits, leaving the rest of the vest intact and ready to absorb another shot.

It’s a responsibility that Waldrop and his team take extremely seriously.

“We screw up here in the slightest fashion, in any stage of the manufacturing, somebody dies,” he said.

Waldrop said the response from law enforcement has been enthusiastic. Being recognized by the President of the United States wasn’t a bad perk, either.

In July 2017, RMA was one of 50 companies selected by the White House for their “Made In America” showcase. That meant a trip to Washington, D.C., and a visit to meet President Trump and Vice President Pence.

While most vests “spider-web” when hit, destroying the integrity of the vest going forward, RMA’s vests isolate the bullet’s impact to the area where it hits, leaving the rest of the vest intact and ready to absorb another shot. (REUTERS)

“The President comes in – he actually sized me up and down because you know I’m a big guy… gave me an extra hard hand shake, so I gave it right back to him. I was clapping and looking at the president and I didn’t realize the vice president is standing right in front of me. So, I shook his hand. The No. 1 thing I think I took away from that is the vice president leaned in and said, ‘thank you for your service to our country.’ I mean, how did you know I was a Marine?” Waldrop said.

The married father of three says he would be able to generate a greater profit by making the vests overseas. But, according to Waldrop, Made in the USA is “a symbol of pride, not about dollars.”

“When I’m dead and gone, I want to be remembered for the product that we built here and the amount of people that are alive today because of that product,” he said.

And, while most people assume the name of the company stands for something tough or militaristic, it’s actually the first initial of each of his three daughters – Renee, Megan, and Alexis.

“When you have a little baby girl in your arms, you melt like butter on a hot day in August,” Waldrop gushed. “So, that’s what happened to me with my girls.”