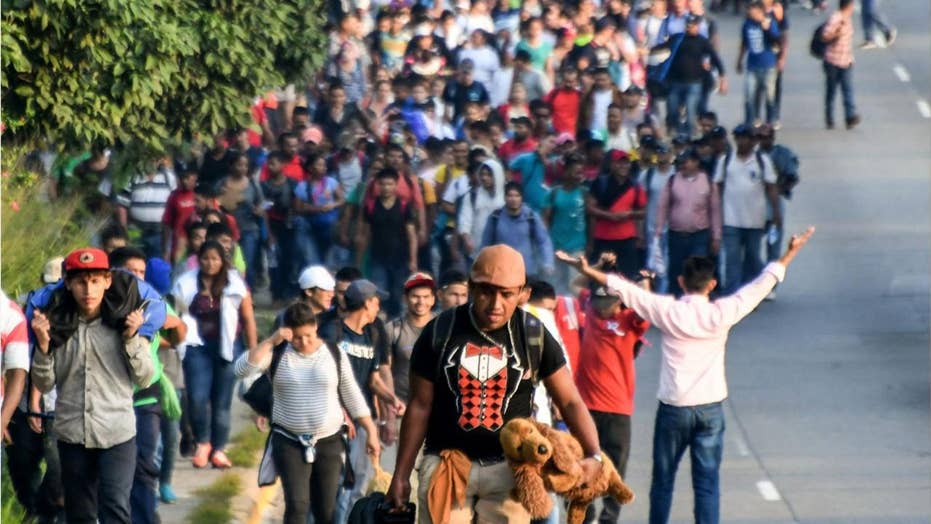 Hundreds of migrants who reportedly have broken away from the caravan moving through Guatemala are now said to be at that country’s border with Mexico, just hours after President Trump issued a warning that he may ask the military to get involved if officials there can’t “stop this onslaught.”

A migrant shelter in Tecun Uman on the Guatemalan side of the border reported Thursday that hundreds of Hondurans from the caravan of about 4,000 have already made it there, according to the Associated Press.

The rest reportedly are hours behind in Guatemala City as the caravan appeared to be dispersing in some parts. Migrants are hopping on buses and hitching rides instead of journeying northward on foot – but it’s unclear whether those who have made it the farthest will try to enter Mexico immediately or wait for others so they can attempt a mass crossing.

Videos circulating on social media purportedly showed hundreds of the migrants – many wearing backpacks – walking on foot in the Mexico-Guatemala border town. In that area, only the Suchiate River and a pair of bridges separate Mexico and Guatemala.

Mexico already has sent police to the border to meet the migrants and have said anyone with travel documents and the correct visa will be allowed to pass, while some others in the group can apply for refugee status. But officials also cautioned that those who try to cross in an “irregular manner” could be detained and deported, according to the Associated Press.

Honduran migrants who are traveling to the United States as a group, get a free ride in the back of a trailer truck flatbed, as they make their way through Teculutan, Guatemala.

The AP added this morning that none of the migrants its reporters spoke to were carrying passports, which all but assures a high-stakes showdown with Mexican border officials in the coming hours and days.

A showdown which, according to Trump, could become a matter for the U.S. military if Mexico can’t stop the caravan.

“In addition to stopping all payments to these countries, which seem to have almost no control over their population, I must, in the strongest of terms, ask Mexico to stop this onslaught - and if unable to do so I will call up the U.S. Military and CLOSE OUR SOUTHERN BORDER!” Trump tweeted Thursday morning.

Trump's latest threat against the caravan -- which originated in Honduras and is bound for the U.S. in a bid to escape pervasive poverty and violence – comes as Secretary of State Mike Pompeo heads to Central America to discuss the issue.

“I am watching the Democrat Party led (because they want Open Borders and existing weak laws) assault on our country by Guatemala, Honduras and El Salvador, whose leaders are doing little to stop this large flow of people, INCLUDING MANY CRIMINALS, from entering Mexico to U.S.,” Trump wrote in another tweet.

One member of the caravan, Henry Tejeda, told the AP he left his wife and four children to join the group due to increasing violence in Honduras, where he said his mother was murdered four years ago and his brother was shot.

The well-traveled Pompeo – fresh off a high-profile Middle East jaunt during which he met with leaders from Saudi Arabia and Turkey regarding the disappearance of activist Jamal Khashoggi – is now scheduled to head to Panama City on Thursday and Mexico City on Friday.

He will meet with the presidents of both countries to “discuss our ongoing security cooperation efforts to disrupt the illicit movement of cash, weapons, drugs across our shared border as well as the issue of stemming illegal immigration and strengthening accountability for corruption and human rights abuses, and bringing members of transnational criminal organizations to justice,” a senior State Department official said.

The migrant caravan will be a “prominent” topic of discussion, too, the official said.

“Certainly it’s an issue that we have viewed as a shared challenge and we continue to work closely with countries in the region to address the underlying economic, security, and governance conditions that have driven illegal immigration to the United States,” the official added.

Since 2015, the U.S. government has sent more than $2.6 billion in foreign assistance to the Northern Triangle countries of Guatemala, Honduras and El Salvador. Trump has repeatedly threatened to cut off that aid if the mass migration continues.

The caravan set off last Friday from San Pedro Sula, Honduras’ second-largest city and a place widely considered to be one of most dangerous in the world when judged by homicide rate. At its start, the group consisted of about 160 people, according to an AP estimate.