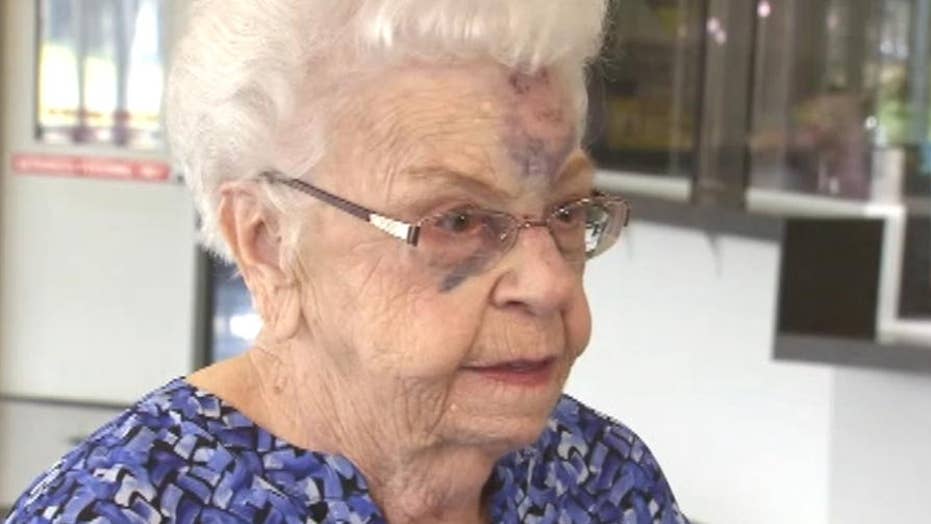 88-year-old Michigan woman knocked on her face in carjacking

88-year-old Michigan woman knocked on her face and badly bruised during a carjacking in a Walmart parking lot.

The man who punched and carjacked an 88-year-old woman in Michigan on Tuesday may want to think twice before crossing her path again.

The Livonia Police Department said in a news release that Gloria Kevelighan was attacked in the parking lot of a Walmart in the Detroit suburb by a man who approached her from behind and grabbed her purse.

After trying to fight the man off with her cane, the man then punched the 88-year-old in her head and threw her to the ground while his accomplice jumped into the passenger side of her vehicle. The man then got behind the wheel of Kevelighan's car and drove off, nearly running her over as she lay on the ground.

The 88-year-old shared details of her attack on Wednesday, telling FOX2 it was "traumatic" and "happened in seconds."

"He pushed me and I fell flat on my face," she told FOX2. "I hit my head, I was bleeding and everything."

The 88-year-old said she did everything she could to fight back against her attacker.

A witness who saw the whole attack unfold followed the vehicle, but lost track of the car. Officers later spotted the two in the same area and arrested them without incident.

Kevelighan she hit her head and was bleeding after being knocked down in the parking lot of a Walmart located just outside of Detroit. (FOX2)

The man, a 38-year-old from Sterling Heights, and a 41-year-old woman from Lincoln Park, are expected to be arraigned on Thursday. Livonia Police the said identities of the suspects are being withheld until their arraignment.

When asked by FOX2 what she would do if she ever came face-to-face with her attacker, the 88-year-old said in stark terms how she would respond.