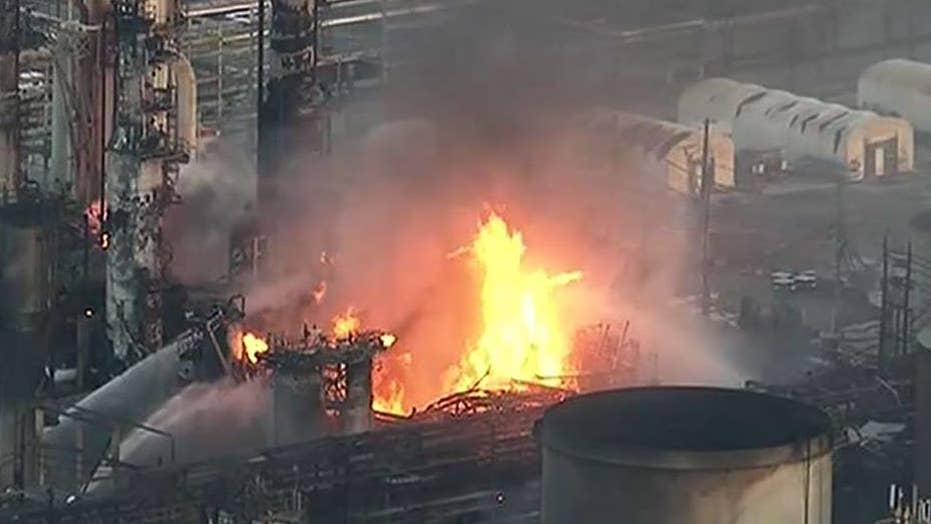 No injuries are reported after a fireball lights up the night sky over Philadelphia with residents saying they could feel the heat from 5 miles away; Jacqui Heinrich reports from the scene.

A massive fireball lit up the night sky in South Philadelphia early Friday in what was apparently an explosion at a local refinery. Early reports gave the location as 31st Street and Passyunk Avenue, not far from the city’s sports complex.

Shortly after 5 a.m. Friday, Philadelphia's FOX 29 reported that the fire had been contained with no reports of injuries or evacuations.

Reports of the fire began spreading on social media shortly after 4 a.m. Friday.

KYW-TV reported that the refinery has its own fire brigade. The cause of the fire was still unclear.

Road closures as a result of the blast included a stretch of Interstate 76 from University Avenue to the Walt Whitman Bridge as well as Penrose Avenue and 26th Street, Philadelphia's FOX 29 reported.

The Platt Bridge was temporarily closed, but WPVI-TV reported that it had reopened.

Four SEPTA transit routes have been diverted because of the fire.

The complex produced 335,000 barrels of oil daily. Philadelphia Energy Solutions says the oil refining complex is the largest on the U.S. Eastern Seaboard.