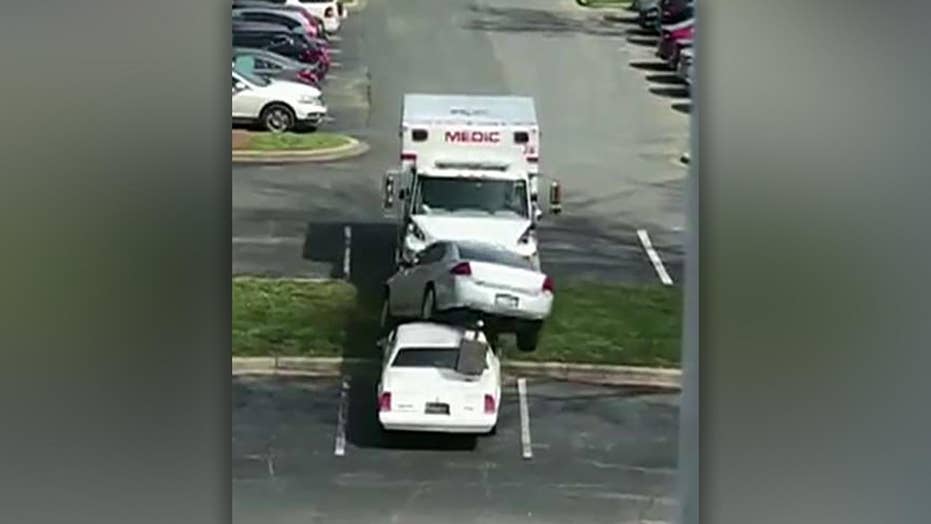 A male suspect has been hospitalized after stealing an ambulance and ramming it into cars in Charlotte, North Carolina.

Authorities in North Carolina arrested a man Monday after a wild parking lot scene in which a stolen ambulance crashed into several vehicles -- a stunning episode that was caught on video.

Charlotte-Mecklenburg Police told FOX46 the incident happened around noon in the parking lot of a business in southeast Charlotte.

Paramedics from the Mecklenburg Emergency Medical Services Agency, also known as Medic, had responded to a call about a half hour earlier and were treating a patient when a person suddenly approached the vehicle and got inside.

The crew was able to get out of the ambulance before the man took off in the stolen vehicle. He traveled across the parking lot before crashing into several vehicles.

In a video obtained by FOX46, a woman can be heard reacting as the ambulance strikes the parked vehicles.

"Oh my God! I cannot believe what we're watching!" the woman can be heard saying.

No one was injured during the incident, but several vehicles were damaged.

Several vehicles were damaged after a man stole an ambulance in a parking lot of a business in Charlotte, North Carolina on Monday. (FOX46)

The man can then be seen running away from the ambulance as police arrive. Officers eventually surrounded the man and took him into custody.

Authorities have not yet identified the man or announced what charges he may face in connection with the incident. A possible motive for the brief, destructive joyride was also not clear.