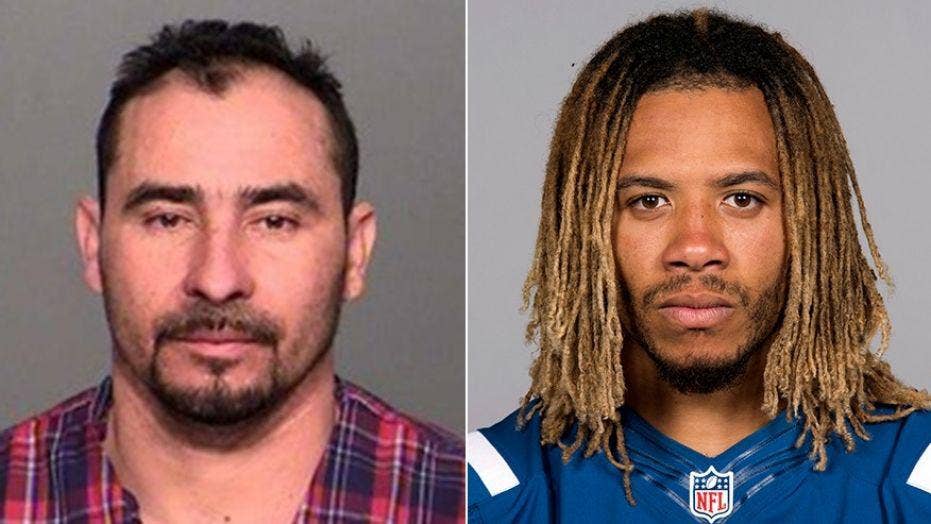 A man from Guatemala living illegally in the U.S. was sentenced Friday to the maximum of 16 years in prison for a drunken-driving crash that killed Indianapolis Colts linebacker Edwin Jackson and his Uber driver.

Manuel Orrego-Savala, 37, pleaded guilty in July to two counts of operating a motor vehicle with a blood-alcohol content of .15 or more, causing death. The sentence marked the maximum possible under his plea agreement.

Manuel Orrego-Savala, 37, pleaded guilty in July to two counts of operating a motor vehicle with a blood-alcohol content of .15 or more, causing death (Indiana State Police via AP)

Investigators said Orrego-Savala had a blood-alcohol content of 0.19 — nearly 2 ½ times Indiana's legal limit — when his F-150 truck crashed into Jackson and his Uber driver, Jeffrey Monroe, 54, on Feb. 4 along Interstate 70 in Indianapolis.

Monroe, of Avon, Indiana, had pulled over when the 26-year-old Jackson became ill. Both men were standing outside Monroe's car on the highway's shoulder when Orrego-Savala's truck crashed into them.

Authorities said Orrego-Savala was walking away from the crash when a state trooper detained him. Under his plea agreement, prosecutors dropped two counts of failing to remain at the scene of an accident.

A Marion County judge sentenced Orrego-Savala after hearing an emotional testimony from Monroe’s widow, Deborah Monroe, and Jackson's mother. The widow told Orrego-Savala that the crashed killed “the greatest love of my life” and destroyed their retirement plans that included travel and fulfilling her husband’s dream of going to the Great Wall of China.

"My family and I are serving a life sentence because of you," she said, speaking directly to Orrego-Savala, who kept his head lowered during much of Friday's hearing.

Edwin Jackson grew up in Atlanta and started eight games for the Colts during the 2016 season, finishing third on the team with 61 tackles. (Getty Images)

"You're a drunk, a liar, a murderer and a coward," Monroe said.

Jackson grew up in Atlanta and started eight games for the Colts during the 2016 season, finishing third on the team with 61 tackles. Jackson was considered a possible starter at inside linebacker for 2017 but missed the season after suffering a training camp injury. His mother, Mary Ellen Powell Jackson, told the court she was preparing to leave Sunday services when she learned that he had died in a crash in a phone call.

"Our hearts have been ripped apart and we're always asking, 'Why Edwin?'" she said, recalling him as a hardworking, handsome athlete, and a good, obedient and caring son who had "a heart of gold."

Orrego-Savala was deported in 2007 and 2009. Federal authorities said he illegally re-entered the U.S. and faces federal immigration charges that could potentially result in a 10-year sentence, said Jeremy Johnson, a Marion County deputy prosecutor.

“I’m grateful he was an illegal immigrant because our federal government will give him 10 more years. So that’s 26 years he’ll spend in prison for what he did,” Monroe said according to FOX 59.

Fox News’ Judson Berger and the Associated Press contributed to this report.