Raw video: Detectives release videos that show a Minnesota grandmother wanted in the murders of her husband and a Florida woman.

Authorities released new surveillance video Wednesday of “Losing Streak Lois” Riess, the 56-year-old grandmother from Minnesota who sparked a nationwide manhunt after she allegedly killed her husband and a woman in Florida before stealing her identity. In the video, the suspect was reportedly wearing the slain woman’s hat.

The Lee County Sheriff’s Office released the video appearing to show Riess at a hotel in Ocala, Fla., on April 6, the News-Press reported.

A cousin of Pamela Hutchinson, whom Riess is believed to have killed, told the outlet that her deceased family member had a tendency to don hats, including one that she said looked like the one atop Riess’ head in the video.

“When I saw the hat, I just broke down because this was one of Pam’s prized possessions,” Tabitha Lohr Stoops told the News-Press. “This was one of her favorites, and she wore it many times.”

“For me to see this vile woman wearing my cousin’s hat after she murdered her was heartbreaking,” she continued. 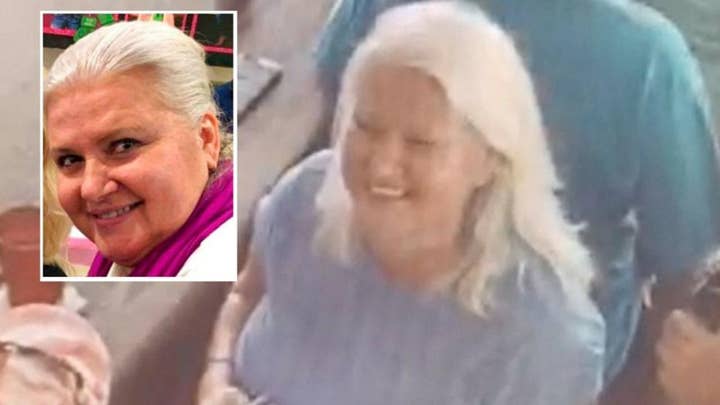 The sheriff’s office said the video released Wednesday is from a Hilton hotel in the Ocala area and Riess appears to be entering the building and walking up to the front desk. A white car is also seen driving around a parking lot.

Riess was a guest at the hotel on April 6 and 7, the News-Press reported, citing the sheriff’s office.

Billboards featuring Riess were posted in Texas, New Mexico, California and Arizona, the Star Tribune reported, and a $5,000 reward has been offered for information leading investigators to Riess, who has been on the run since she allegedly killed her husband, David, on March 23 in Minnesota.

Riess allegedly fatally shot her husband at their home before heading to Florida where she allegedly killed Hutchinson. Police said they believe Riess, a blonde haired, brown eyed woman who is 5 feet five inches tall, killed the woman because they look similar.

The suspect is an alleged gambling addict who frequently lost money playing in casinos, thus coining the nickname of "Losing Streak Lois." She was caught on video surveillance chatting with Hutchinson at Smokin’ Oyster Brewery in Fort Myers Beach, Fla., on April 5. Four days later, the woman was found after being shot to death.

"Ms. Hutchinson's purse was found to be in disarray and all cash, credit cards and identification appeared to be removed," Lee County Undersheriff Carmine Marceno said. "Further investigation revealed that Ms. Hutchinson was targeted by the suspect due to the similarities in their appearance."

Riess is accused of stealing Hutchinson’s car, a white Acura TL with Florida license plate Y37TAA, before fleeing the state.

Riess was last seen in Refugio, Texas, located about 40 miles north of Corpus Christi before authorities lost track of her.