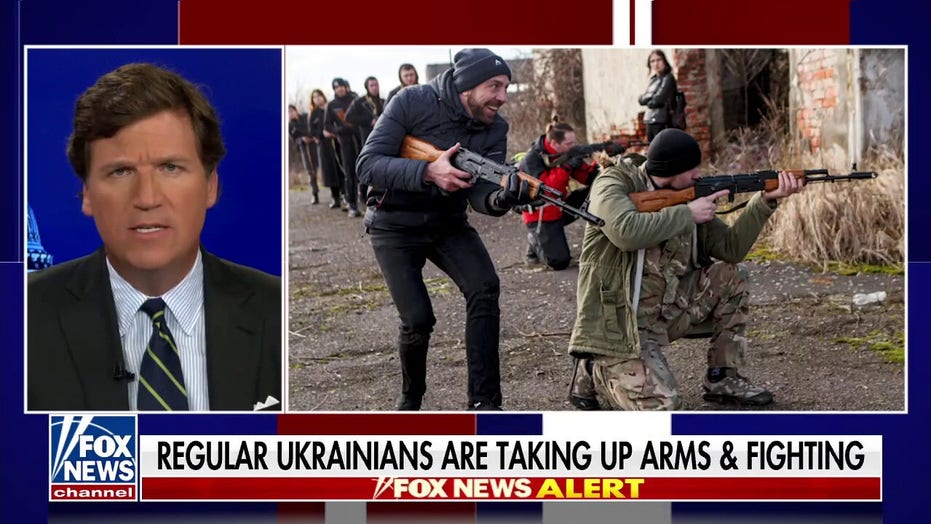 Ukranian members of parliament take up arms, join citizens on the street

Sviatoslav Yurash tells Tucker Carlson that he is joining his city in the fight and has no intention of leaving Ukraine.

LOS ANGELES – Thousands of miles from where they were born, Russian Anastasia Shostak and Ukrainian Andrew Berezin developed a friendship in Los Angeles because of their shared Jewish faith.

Now they have yet more in common: Both are feverishly working to get their families out of their respective homelands and into Israel after Russia launched its war against Ukraine, and both turned out over the weekend in their adopted hometown to protest the invasion.

Los Angeles is home to many from the Eastern European diaspora, a place where Russians, Ukrainians, Belarusians, Romanians, Georgians, Moldovians, Estonians and Lithuanians often pray, work, shop and eat together. The war triggered by Russia's invasion has resulted in raw and painful emotions in the pews of shared houses of worship and in the broader community.

Berezin, a software engineer, said that for years the community has been united by common bonds of faith, culture and history, but lately things have felt "strange."

"We may be from Latvia, Ukraine, Belarus or Moldova, but we've considered each other brother nations," he said. "We never thought each other as separate because of our shared legacy. I feel like now we're forced to separate. It feels like 'us' against 'them' now, and it's not good."

At Berezin's urging, his parents and 90-year-old grandmother crammed themselves and prized possessions into a tiny sedan and drove over 1,200 miles to Poland, where they await paperwork to join his sister in Israel.

On Sunday he was one of hundreds of demonstrators who turned out to wave flags, march and hold vigil in antiwar protests staged in both Hollywood and Santa Monica.

Shostak was among the numerous Russians who came to add their voices in opposition to their home country's actions. She and others openly proclaimed their disgust, sadness and remorse over the invasion.

Shostak, who helps run a program called Caring for Jews in Need at the Jewish Federation of Greater Los Angeles, has family in both Russia and Ukraine. She said she feels "guilty" even though she has never seen eye to eye with the Russian government or President Vladimir Putin.

"I know (Russians and Ukrainians) are friends here, but deep down there is probably that resentment of your country attacking my country," she said. "My country is the aggressor here. It's important for me to get out there and say I support my Ukrainian brothers and sisters. We need to say we're not enemies."

Like Berezin, Shostak fears for her parents' safety and is working to get them from Russia to Israel.

There are also Russians in the community who support Putin's actions, though they're generally keeping quiet on the issue, careful to avoid offending neighbors with whom they have bonded over the years.

RUSSIA COMPLAINS TO US AND CANADA ABOUT UKRAINE PROTESTS NEAR EMBASSIES

John Khrikyan, who worships alongside Ukrainians and counts many of them as friends, said in a phone interview that Putin is justified in attacking what Khrikyan considers an anti-Russian and corrupt government.

"Historically it's one people, one culture and one nation," he said of Russia and Ukraine. "I believe Ukraine should be an independent country. But we should be friends, not enemies."

At local houses of worship, solidarity with Ukraine was the order of the day Sunday.

Iryna Hetman-Piatkovska prays for her son who is a soldier in Ukraine during a service for Ukraine at the Saint Andrew Ukrainian Orthodox Church of Los Angeles Sunday, Feb. 27, 2022. (AP Photo/Damian Dovarganes)

"I came here to show my support for Ukraine," said Liana Ghica, who dressed in the blue, yellow and red of her native Romania for the occasion. "This is not just about Ukraine but the future of our world, our freedom and the future of our children. It's about human rights."

In an emotional sermon, the Rev. Vasile Sauciur denounced the invasion as "madness" and "evil." He likened it to the biblical battle of David against Goliath and said the underdog Ukraine will emerge victorious, as David did.

"(Ukraine) doesn't have much, but we have the right purpose, the right motive," said Sauciur, who was born in Romania but has many Ukrainian family members and identifies as a Ukrainian priest. "I hope our good neighbors support us and remember that this pestilence can go beyond Ukraine. Good people must stand up for what is right."

Some at the service were praying for loved ones serving in Ukraine's armed forces.

Iryna Hetman-Piatskova cradled her cellphone in her palm as she looked at a photo of her son in fatigues, sent from the front lines.

"My plea is to the mothers of Russia to call their sons back home, to stop the war," she said tearfully. "From one mother to another, ask your sons to stop attacking."

And Natalia Blanco recalled speaking this weekend with her brother, who is in the Ukrainian army.

"He told me he is trying to be strong, but it's hard to see other soldiers dying," she said, holding back tears.

A view of damage due to armed conflict between Russia, Ukraine in Donetsk region under the control of pro-Russian separatists, eastern Ukraine on February 28, 2022. (Photo by Stringer/Anadolu Agency via Getty Images)

Lana Worth, a first-generation Russian American who counts both Russians and Ukrainians among her family, said she has been torn and doesn't wish to take sides.

"Do I hate my right hand or left hand?" she said. "Ours is a small world. Hating each other is not an option."

At the Santa Monica protest, held a few blocks from the Pacific Ocean on the city's Third Street Promenade, demonstrators gathered in the afternoon.

Katrina Repina held her infant daughter in one hand and a sign in the other that read: "I'm Russian, I'm sorry."

"I don't support Putin," she said. "My heart bleeds when I see all the news. I feel the Ukrainian people's pain, and I wish I can take that pain away."

Repina came to the protest with Hanna Husakova, a Ukrainian. The two connected via Instagram, and common bonds of language and culture were stronger than the war between their countries.

"Katrina asked me if I wanted to be her friend. She asked me, 'Do you hate me because I'm Russian?'" Husakova said. "I said, 'Absolutely not.' What's going on here is between governments, not people."

Jonas Gavelis, a Lithuanian native who moved to Santa Monica five months ago after winning the green card lottery, donned a T-shirt emblazoned with the slogan "I'm not Ukrainian but I support Ukraine." He worried that the fighting could spill beyond borders, and his home country could be next in Putin's sights.

"Ukraine has supported Lithuania when we needed them," Gavelis said. "Now, it's our turn to show our support."