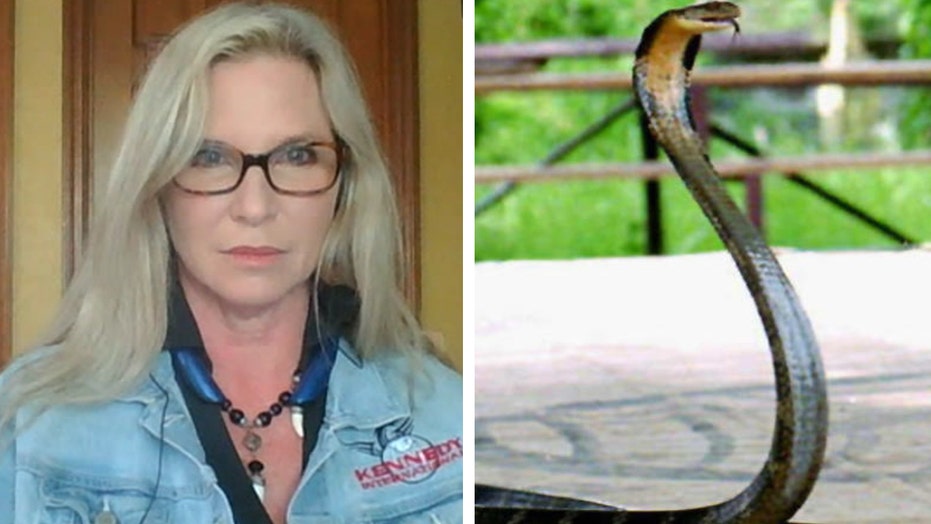 In the Zone: Wife of 'Airplane Repo' star Mike Kennedy is reunited with snake, which was found under a dryer in a garage not far from her home

The reality-TV star who made headlines last year when a deadly cobra escaped from his wildlife refuge in Florida can continue to keep deadly animals on the property due to a legal loophole.

NBC4i.com reported that Florida Fish & Wildlife successfully revoked Mike Kennedy’s license, but dangerous animals can remain at his Dragon Ranch Sanctuary because his wife has a license.

The hunt for an 8-foot king cobra in Florida in late 2015 ended when the snake, named Elvis, was found under a dryer about a half mile from the sanctuary. Cobras are among the deadliest snakes in the world and authorities acted swiftly to mete out punishment. Wildlife officials made it clear that they wanted to revoke Mike Kennedy’s owner’s license.

Kennedy, the star of Discovery Channel’s “Airplane Repo” and self-proclaimed conservationist, has permits to keep potentially dangerous pets on the property. The Orlando Sentinel reported that there have been a number of violations in the past. WFTV reported that Kennedy had at least one other king cobra and was licensed to own a Burmese python, a viper or rattlesnake and venomous lizards.

“In Florida there is an anti-venom in Miami Dade Fire and Rescue – Venom 1 – but that’s in Miami, and that’s a ways away from Orlando, and you wouldn’t survive long enough to get the anti-venom. The King Cobra bite is one of the most difficult bites to survive," saidTerry Phillip, the curator of reptiles at The Black Hills Reptile Gardens in Rapid City, SD.

Kennedy tried to calm the community at the time of the snake's escape and said it was “over-the-top” in its reaction. Still, the cobras have been known to kill elephants in one bite.