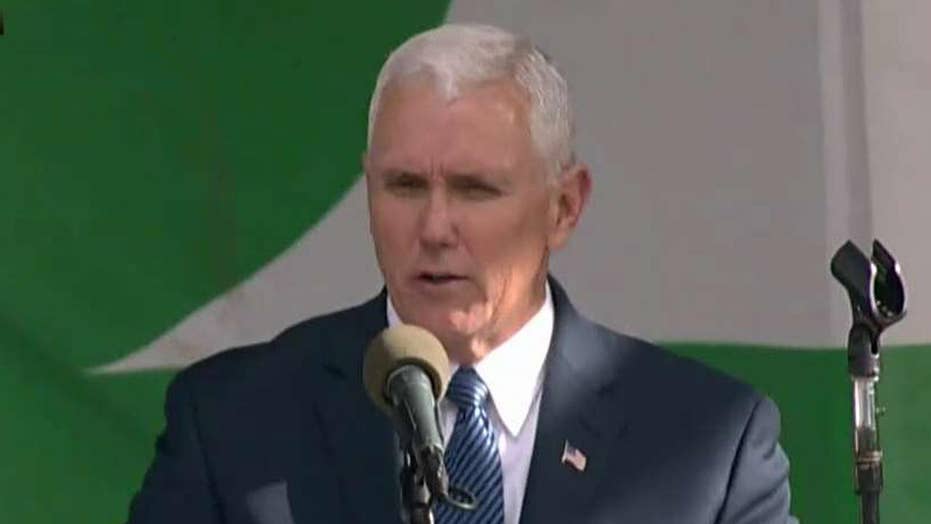 The vice president addresses the annual March for Life rally

Vice President Mike Pence fired up the crowd at Friday's March for Life in Washington, telling the pro-life throng their movement is succeeding.

"Let this movement be known for love," he added to thunderous applause. "Not anger. For compassion. Not confrontation."

Looking forward to @March_for_Life tomorrow in the District. Everyone travel safely! See you there!

The 43rd annual event was the third major event in the nation’s capital this week, and drew activists from around the country. There was no immediate estimate of the crowd size.

Participants told Fox News getting to the event was a must.

“There is no more important issue for me," said Amanda Fowley, 33, who traveled with her husband from Rhode Island and has attended every year since she was 13.

“I am here marching to recognize the babies, of course. But I also march for the women and for the pain many of them go through after the abortion. So often they are told there are no consequences and that is not true. They are lied to about what happens after an abortion.”

Morgan Hammer, 13, was attending her first march, and came with her classmates from Immaculate Conception, a Catholic school located west of St. Louis. Among her peers, she says the views on abortion are “mixed,” she said, adding that it is a topic that many of them openly discuss.

“We are the next generation,” she said. “We represent the future of the [movement], so it is important to be here marching for life.”

After a week of debate over crowd sizes at various events in the nation’s capital, organizers anticipated a large crowd. The speakers, who also included Rep. Mia Love, R-Utah and NFL star Benjamin Watson, and good weather, were likely to help.

“Each of our speakers exemplifies this year’s theme, ‘the power of one’, in a beautiful way,” said Jeanne Mancini, president of March for Life. “Their words are sure to motivate the marchers, as well as the millions of pro-life Americans who will be watching, who dedicate themselves to restoring a culture of life in the United States.”

Washington already hosted two major events in the last week that have generated debate over crowd sizes, the inauguration of President Trump one week ago and the “Women’s March on Washington" a day later. Both drew enormous crowds and were, for the most part, orderly. But Trump’s team got into a battle with much of the media over the size of his event’s crowd, and estimates for the women’s march varied, with some topping 1 million.

The first March for Life drew an estimated 20,000 people, but in recent years, the event has exploded. An estimated 650,000 attended the 2013 event, although last year, a blizzard dumped two feet of snow on Washington and the crowd was much smaller.

Pence was the first vice president or president ever to speak at the March for Life.