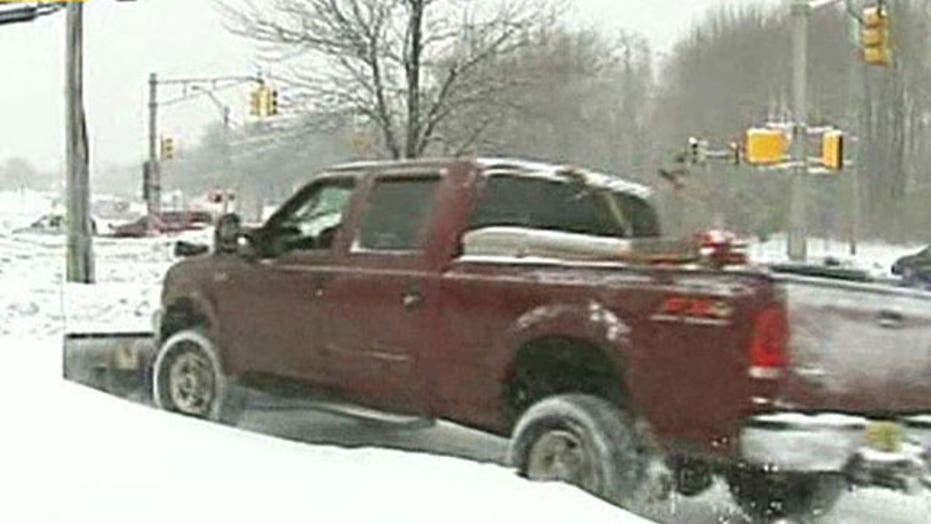 A fast-moving storm brought several inches of snow as well as rare "thundersnow" to parts of the East Coast on Tuesday in the latest round of wintry weather to hit the area.

The storm came days after the Southeast and Northeast were paralyzed with heavy snow, ice and massive power outages.

The storm brought "thundersnow," an area of heavy snow with embedded thunder, from near downtown Pittsburgh to Dubois. Forecasters said moderate to heavy snow would follow with snowfall rates over 1 inch per hour.

The storm led Pennsylvania Turnpike officials to reduce speed limits to 45 mph along the entire 360-mile highway system. State transportation officials followed suit on some interstates and other roads. Last week, a series of crashes on the turnpike outside Philadelphia injured 30 people and left cars stranded in a miles-long backup for hours.

In New Jersey, officials looking to clear up roads were hoping a barge with 40 tons of salt would arrive from Maine, but it was blocked by Homeland Security at the Port of Newark, according to MyFoxNY.com. Officials could not get clearance for the delivery since the vessel was not flying the American flag.

New Jersey is currently suffering from a salt shortage and officials say they are working with Homeland Security to get larger shipments to the area.

At least 230 tickets have been issued since the so-called ‘ice missile’ law went into effect on Jan. 1, MyFoxNY.com reports.

Forecasters predicted many East Coast states would see 3 to 6 inches of snow on Tuesday after the storm moved in overnight from the Great Lakes and through the Mid-Atlantic. Some areas were getting rain, sleet or a snow-rain mixture.

Temperatures above freezing on Tuesday should move up to the 40s to mid-50s for the remainder of the week, he said, giving people a reprieve from shoveling and shivering.

Coastal areas in Maine and Massachusetts saw blizzard-like conditions with more than a foot of snow on Saturday, and thousands on Cape Cod were left without power. Maine was expected to get another 4 to 8 inches of snow on Tuesday. Boston was forecast get 1 to 3 inches but Worcester, located west of the capital, could get as much as 6 to 8 inches.

Last week, about 1.2 million utility customers lost power as the storm marched from the South through the Northeast. Schools, businesses and government offices closed. The storm was blamed for at least 25 deaths stretching from Texas to Maine.