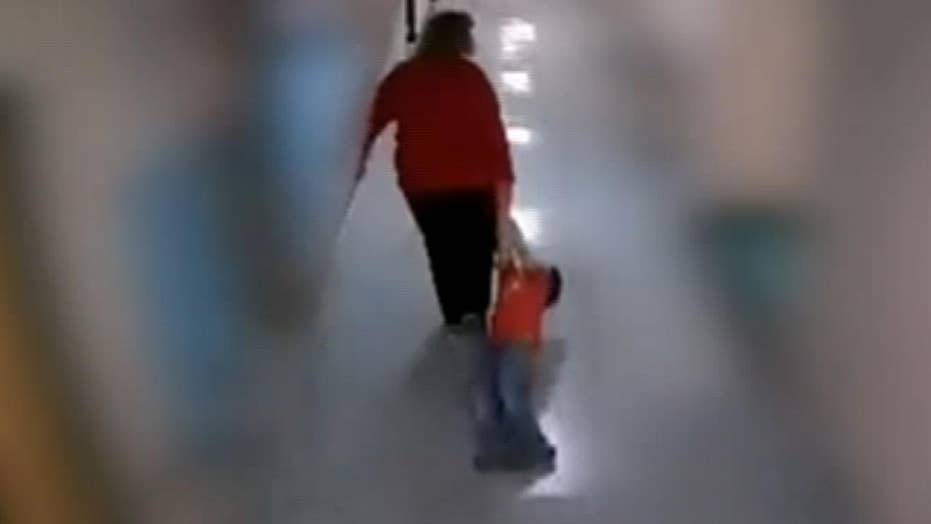 Raw video: Greenup County Schools superintendent released a statement saying administrators contacted the boy's parents, got medical attention for the student and reported the incident to child protective services once they became aware of the incident at Wurtland Elementary School in Kentucky.

A Kentucky elementary school teacher, who officials say is the woman seen in a shocking video dragging a 9-year-old autistic boy down a school hallway, pleaded not guilty Wednesday to a misdemeanor assault charge.

Trina Abrams, a former resource teacher at Wurtland Elementary School in Eastern Kentucky, was identified as the woman who dragged the child out of a classroom and through multiple hallways on Oct. 25, after the boy reportedly became frustrated and upset.

At one point, the woman identified as Abrams is heard asking the boy if he wants to walk, to which he replies “no.” At that point, she yells at him to get up while pulling on the boy’s body as he refuses to move. He remains limp and she continues to drag him around the hallways.

“The fact that my son is not able to fully verbalize what he went through means we must fight that much harder for all kids, but especially the kids who cannot speak for themselves,” she wrote.

On Monday, the Greenup County School District announced Abrams had been fired.

“The parent was contacted immediately and the student was assessed by the school nurse and referred for outside medical evaluation. Child Protective Services was contacted and the Kentucky State Police opened an investigation,” Superintendent Sherry Horsley said in a statement to WSAZ-TV. “The teacher was removed from the school and a formal investigation was conducted. The superintendent also followed protocol and reported the incident to the Kentucky Education Standards Board.”

The school did not release Abrams name, but she was identified as the accused in court documents and Nelson’s social media post.

Nelson told WSAZ her son was diagnosed with Autism, ADHA, PTSD, anxiety, and depression and that he has an Individualized Education Program in place to make sure “all his needs are met while at school.”

“[The video] is so hard for me to watch. He didn’t do anything wrong,” Nelson said.

Abrams is expected to be arraigned Wednesday on the assault charge.