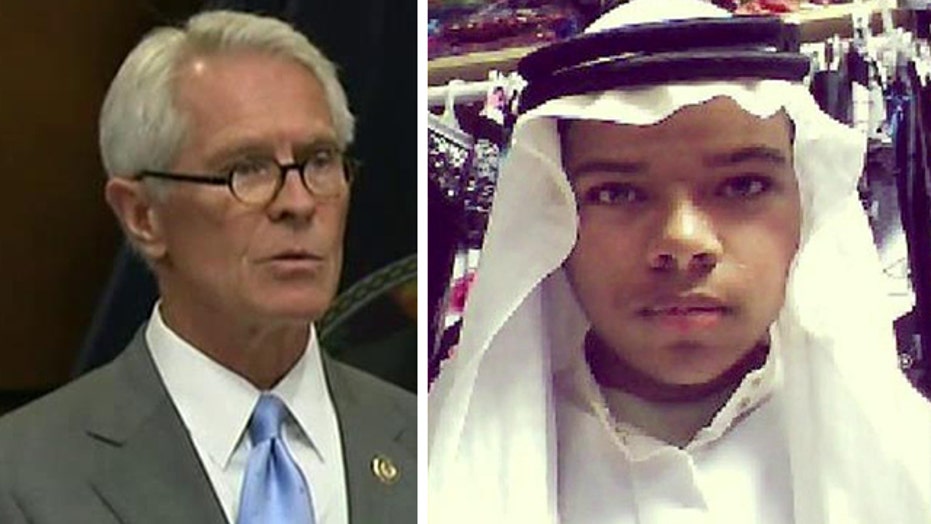 A 20-year-old Kansas man plotted to kill American soldiers with a vehicle bomb at the Fort Riley military base, an attack he planned to carry out on behalf of the ISIS terror group, prosecutors announced Friday.

John T. Booker, also known as Mohammed Abdullah Hassan, was arrested as part of a lengthy FBI investigation. Federal authorities said he was arrested near the army base in Manhattan, Kansas, as he completed final preparations to detonate the bomb, which had, in fact, been rendered inert while he was under FBI surveillance.

“As alleged in the complaint, John Booker attempted to attack U.S. military personnel on U.S. soil purportedly in the name of (ISIS)," said Assistant Attorney General John Carlin. "Thanks to the efforts of the law enforcement community, we were able to safely disrupt this threat to the brave men and women who serve our country. Protecting American lives by identifying and bringing to justice those who wish to harm U.S. citizens remains the National Security Division's number one priority."

Prosecutors said Booker repeatedly stated he wanted to engage in violent jihad on behalf of ISIS. He became an Army recruit and said he intended to commit an insider attack against American soldiers, like Major Nidal Hassan at Fort Hood in Texas.

Friday night, a second person was charged in connection with the alleged plot. The U.S. Attorney's office said Alexander Blair of Topeka had been charged with one count of failing to report a felony.

The criminal complaint alleged Blair, who "shared some of Booker's extremist views," had loaned Booker money to rent a storage unit where he could store bomb components.

Booker is the latest among a number of ISIS sympathizers who have been arrested by the FBI in recent weeks.

He was due to appear Friday afternoon in federal court in Topeka.

The criminal complaint Friday alleged that Booker spent months developing and attempting to execute a plan that would result in his own death as an ISIS suicide bomber. It also alleged that he “planned to pull the trigger of the explosives himself so that he would die in the explosion,” Kansas U.S. Attorney Barry Grissom said at a news conference.

"I want to assure the public there was never any breach of Fort Riley Military Base, nor was the safety or the security of the base or its personnel ever at risk," said Kansas City FBI Special Agent in Charge Eric Jackson. "Recently the Command Staff at Fort Riley has been working hand in hand with law enforcement to ensure the utmost security and protection for the men and women who serve our country, and the surrounding community that supports the base."

Booker allegedly plotted to construct an explosive device for attack on American soil for months during meetings with two FBI informants. He told one killing Americans was permissible because the Koran “says to kill your enemies wherever they are.”

Prosecutors said the jihadi wannabe advanced the plot by acquiring components for a vehicle bomb, producing a propaganda video and renting a storage locker to store components for the explosive device.

Prosecutors said he identified Fort Riley as the target and talked about his commitment to trigger the device himself and become a jihadi martyr.

His arrest came behind the wheel of a van he belived was packed with 1,000 pounds of explosive.

Last year FoxNews.com reported exclusively that Booker was under investigation for threatening online to commit a "Fort Hood-inspired" act of terror just weeks away from reporting for basic training.

The military learned of his radicalism - which had apparently been on display for months in online posts where he praised Usama bin Laden and pledged to die for radical Islam.

FoxNews.com reported then that Booker was the subject of an FBI alert.

“Getting ready to be killed in jihad is a HUGE adrenaline rush! I am so nervous," read a March 19. 2014 post on the Facebook page authorities believe belonged to Booker. "NOT because I’m scared to die but I am EAGER to meet my lord.”

FoxNews.com reported Booker enlisted in the Army in February 2014 and was due to report for basic training less than two months later on April 7. But the FBI interviewed him in March and alerted the Army, which formally discharged him.