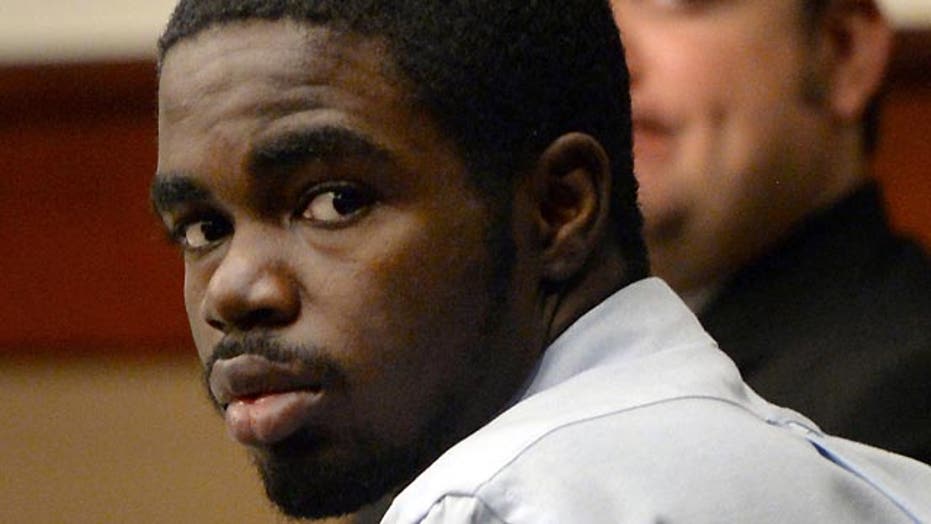 MARIETTA, Ga. – An 18-year-old man was convicted of murder in the shooting of a baby who was riding in a stroller alongside his mom in a town in coastal Georgia despite the defense's attempt to cast guilt upon several others, including the child's parents.

Jurors deliberated about two hours before finding De'Marquise Elkins guilty of 11 counts, including two counts of felony murder and one count of malice murder in the March 21 killing of 13-month-old Antonio Santiago in Brunswick. The man's mother, Karimah Elkins, was on trial alongside him and was found guilty of tampering with evidence but acquitted of lying to police.

De'Marquise Elkins faces life in prison when he is sentenced at a later date. At the time of the shooting he was 17, too young to face the death penalty under Georgia law.

His lead defense attorney, public defender Kevin Gough, vowed to appeal the verdict. A judge denied his request for the teen to be out on bond during the appeal.

"Marky Elkins and his family are confident that he will receive another trial in which he will be able to present fully his defense," Gough said. "Mr. Elkins will eventually be exonerated."

Karimah Elkins' attorney, Wrix McIlvaine, said he would talk to his client and that they would likely appeal.

Sherry West testified that she was walking home from the post office with her son the morning of the killing. A gunman demanding her purse, shot her in the leg and shot her baby in the face after she told him she had no money, she said.

Prosecutors, who declined comment after the verdict, said during two-week trial that De'Marquise Elkins and an accomplice, 15-year-old Dominique Lang, are the ones who stopped West. Prosecutors say the older teen pointed a small .22-caliber revolver at West and demanded money. When West refused several times to turn over the money, Elkins fired a warning shot, shot the woman in the leg and the baby between the eyes, prosecutors said.

The killing in the port city of Brunswick drew national attention, and the trial was moved to the Atlanta suburb of Marietta owing to extensive publicity locally.

Prosecutors have said information from Elkins' mother and sister led investigators to a pond where they found the revolver. Elkins' sister also was charged with evidence tampering.

Lang, who was a key prosecution witness in Elkins' trial, is set to go to trial at a later date.

West told The Associated Press that she didn't want to say too much following the verdict because there are still other trials pending in the case and she will be a witness and she will testify at Elkins' sentencing.

"I knew why I was there and I knew that I didn't have my baby anymore," she said. "In the beginning I was in shock. Now things are kind of really setting in. But I'm hanging in there."

West spent hours on the stand during the trial and was grilled by the defense on her personal and medical history.

"I was a little nervous up on the stand and just being asked so many personal questions by the defense attorney," she said in a telephone interview. "It was embarrassing."

"They finished their case in 25 hours. Everything else they did after that they just sugarcoated," Lockwood said.

The prosecution's witnesses -- many with criminal histories and some drug users -- lied repeatedly and changed their stories throughout the investigation, Lockwood said. The defense also said several law enforcement agents backtracked in their testimony to make sure what they were saying fit the state's version of the story.

West made different identifications of the suspect and behaved strangely after the shooting, occasionally joking and laughing while being questioned by police and making other bizarre statements, Lockwood said. The baby's father, Louis Santiago, was in the vicinity when the shooting happened and showed no warmth toward the child's mother afterward, Lockwood said.

Lang testified that Elkins is the one who asked West for money and fired the shots, but admitted lying repeatedly, Lockwood said. And Lang's cousin, Joe Lang, was in the area on the day of the shooting and fits the description of the shooter.

The defense had strongly suggested in pretrial motions that the baby's parents were the killers. Gough made several suggestions to the same effect during the trial. But much of his questioning that seemed to be heading in that direction -- including attempts to bring up details about the backgrounds of both of the baby's parents -- was blocked by the judge after the prosecution objected.

Prosecutors said the defense presented a lot of theories and speculation but that the evidence and facts in the case proved Elkins' guilt.

Brunswick Judicial Circuit District Attorney Jackie Johnson showed jurors a string of still images pulled from video cameras around Brunswick during her closing argument. They all showed Elkins in specific locations at specific times the day of the shooting.

Johnson also reminded jurors of the testimony of two young women -- one who said Elkins walked her to school at 8:45 the day of the shooting and another who said she spent the night before with Elkins and ate with him later that morning, which was backed up by video stills of them at a convenience store.

The only person whose story didn't match the evidence in the case was Elkins, Johnson said.

Johnson also rejected the accusation that police stopped investigating once they arrested Elkins, noting that they pulled video from various cameras around town and went diving in a pond to recover the gun the following week.

Johnson also slammed the defense for picking on West and her behavior following the shooting: "Does anyone know what the protocol is for how you're supposed to act when you've just watched your child get shot in the face?"