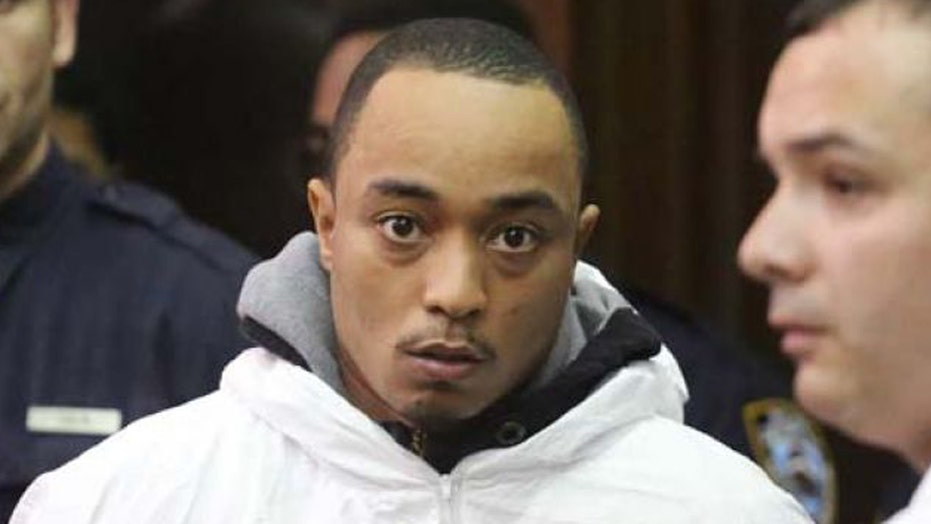 One of the New York judges who helped send a suspected cop killer to rehab instead of jail five months ago said Friday that the deadly shooting "breaks her heart" and that she is "truly sorry."

Manhattan Supreme Court Justice Patricia Nuñez told The New York Post that she will address the issue further at a Nov. 12 court date for the suspect, Tyrone Howard. The paper reported that  Howard was freed despite a history of three felony sale convictions and the urging of prosecutors in the drug case.

Officer Randolph Holder's killing Tuesday has raised questions about the risks and potential shortcomings of drug courts, or drug diversion programs, which have been embraced nationwide as a way to ease jail overcrowding and reduce crime by attacking it at one of its sources: drug abuse.

New York's mayor and police commissioner have branded Howard a career criminal who had once been arrested in a 2009 gunfight on an East Harlem basketball court and should not have been out on the streets.

"He would have been the last person in New York City I would've wanted to see in the diversion program," Police Commissioner William Bratton said.

Yet another judge who handled the case said Howard — a longtime PCP user who despite his long rap sheet had no convictions for violent crimes — was a compelling candidate for drug court.

"I don't get a crystal ball when I get the robe," said state Supreme Court Justice Edward McLaughlin. He defended his decision as "accurate and appropriate," saying that doing time hadn't helped Howard before.

He also said he was never made aware of the 2009 shooting case, which records show ultimately wasn't prosecuted against Howard. A law enforcement official who is familiar with the prosecution of the other defendant in that shooting, and who wasn't authorized to discuss the case publicly and spoke on condition of anonymity, said there was no eyewitness testimony placing Howard as the shooter.

Since their start in Miami in 1989, drug diversion programs have multiplied to 2,500 courts across the country, together handling about 120,000 cases a year, according to the federal National Office of Drug Control Policy.

The agency calls the programs "a proven tool for improving public health and public safety." President Obama mentioned them approvingly in a July speech, saying such programs can save taxpayer dollars.

Drug courts generally target nonviolent offenders who commit crimes to feed their addictions. The courts use treatment, drug testing, incentives and penalties to try to get defendants sober and straightened out.

"Drug courts are the most effective intervention in the justice system for individuals with substance abuse histories," Carson Fox, executive director of the National Association of Drug Court Professionals, said Wednesday.

Studies have credited drug courts with reducing recidivism and drug-use relapses. Some research estimates those reductions save society more money than the treatment costs, though some studies have found the opposite, according to a 2011 congressional report.

But some research has also found drug-court dropout rates of 60 percent, said David Lilley, a criminal justice professor at the University of Toledo.

And some prosecutors and police fear diversion sometimes ends up giving breaks to drug dealers who claim they're addicts to avoid prison.

At 30, Howard has been arrested more than two dozen times since he was 13 and sentenced to state prison twice since 2007 for drug possession and sale. One term came after he tried unsuccessfully for drug court in a 2011 case charging him with smoking PCP while carrying 22 bags of crack cocaine. Howard eventually pleaded guilty to drug possession.

In October 2014, he was charged with selling crack to an undercover officer. He was swept up as part of a larger drug case. Prosecutors sought six years behind bars.

But after reviewing Howard's record, troubled home life and longtime addiction, McLaughlin agreed to refer his case for evaluation for drug court, where another judge OK'd Howard for the program.

McLaughlin said he didn't learn about the 2009 gunbattle until this week. Howard was believed to have shot and wounded another man, Dan Evans, according to court papers. Evans was eventually convicted in the wounding of two bystanders, plus a 2006 murder.

The record doesn't explain why the case against Howard was dropped, and the district attorney's office hasn't commented. But the law enforcement official said no one identified Howard as a shooter except Evans, the defendant.

After being approved for drug court, Howard was released on $35,000 bail in February and pleaded guilty to the drug charge in May.

He started missing monthly status meetings and various court dates in August, then became a suspect in a Sept. 1 shooting. An arrest warrant was issued Sept. 17, and police tried 10 times to locate him, authorities said.

Then, on Tuesday, Holder and his partner caught up with him while chasing after a bicycle thief, police said. Holder, 33, was shot in the head; Howard was wounded in the leg as police returned fire.

Howard's lawyer, Brian Kennedy, has said there are "a lot of missing details" in the case.