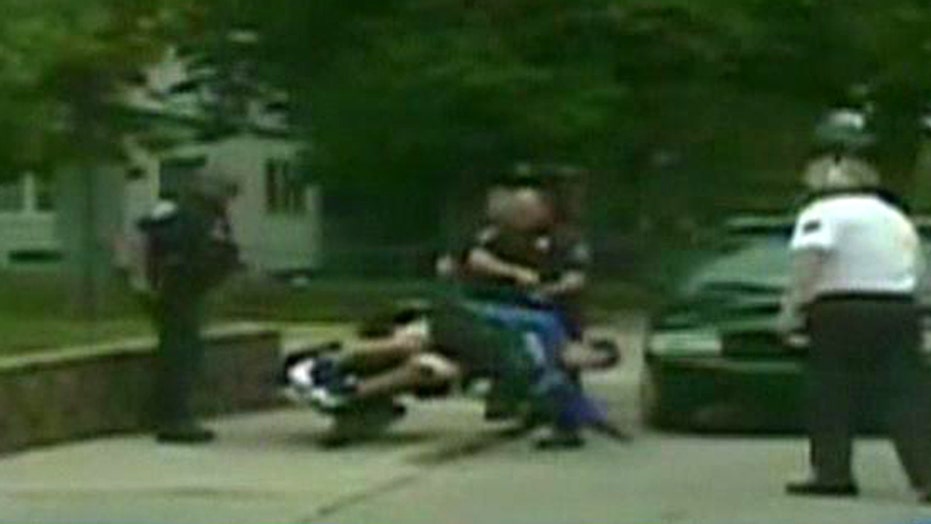 Cop to keep his job after knocking man out of wheelchair

Indiana officer suspended for one year

An Indiana police officer is keeping his job despite a recommendation that he be fired after he was seen on video knocking over a man in a motorized wheelchair.

Lt. Tom Davidson was among Lafayette Police Department officers responding to a call about a man suspected of having a gun near a charter school in October 2013, Fox59.com reported.

Officers reportedly found 25-year-old Nicholas Kincade near the school with a pocket knife that he carries for protection, but no firearm. Police then told Kincade that he could be charged with trespassing and ordered him to leave, Fox59.com reported.

As Kincade began to leave, his wheelchair ran over Davidson’s foot “at which point Lieutenant Davidson pushed Kincade and the wheelchair, causing it to tip over and Kincade to fall out and onto the street,” Chief Patrick Flannelly told Fox59.com.

Kincade was subsequently arrested for battery on a law enforcement officer, but the charge was later dismissed.

An internal investigation by the Lafayette Police Department found Davidson in violation of department policy and recommended Davidson be terminated, the news station reported.

However, a five-member commission found that while Davidson was guilty of unbecoming conduct, he was not in violation of the department’s response to resistance policy, and handed him a 30-day unpaid suspension in addition to a demotion and year of probation, Fox59.com reported.