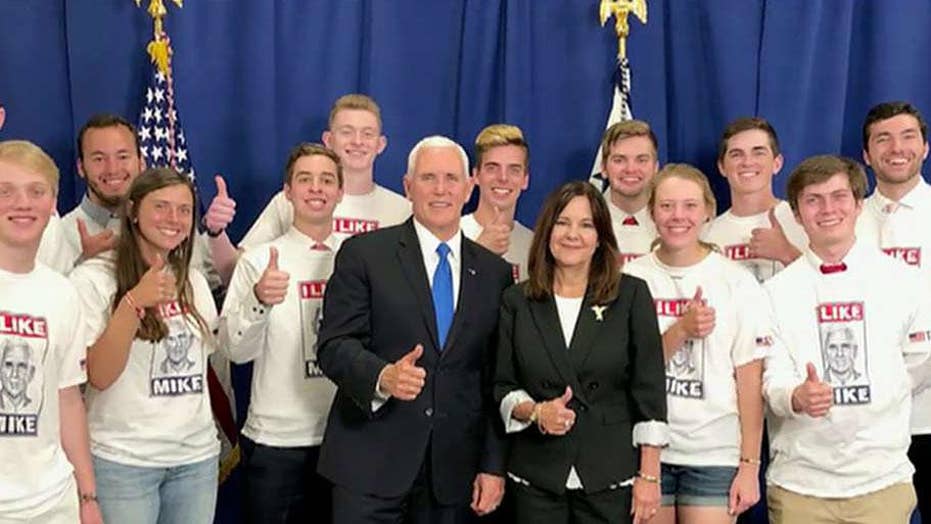 Taylor University sophomore David Muselman started the "I Like Mike" campaign to show the vice president that there are students who support him on campus.

A few Taylor University students walked out during Vice President Pence' commencement address Saturday but he also got a chance to meet with a group that wanted to show him the majority of students on campus are fans of the former Indiana governor.

David Muselman, an incoming sophomore at Taylor, started an "I Like Mike" T-shirt campaign after reports in April that some students and alumni were upset, writing online they were "physically shaking" and "personally attacked" by the outspoken Christian leader's invitation to the small evangelical school located in rural Indiana. The administration stood by its decision and, besides a few students walking out, the vice president was met with a standing ovation.

When Pence found out about the "I Like Mike" campaign, he wanted to meet the students and thank them for their support.

"It was an honor and inspiring to meet with the second most powerful person in the free world who shares our same beliefs," Muselman told Fox News Monday. "What's better than that?"

Vice President Mike Pence met with "I Like Mike" supporters after his commencement address Saturday at Taylor University in Upland, Indiana. (Courtesy of David Muselman)

Pence urged the students, not as vice president or fellow Hoosiers, but as a brother in Christ to live out their Christian faith "because America needs men and women of integrity and faith now more than ever."

He told them "it's become acceptable, even fashionable, to malign traditional Christian beliefs," urging them to "be prepared to face opposition. But be confident. For the Bible says, ‘God has given us a spirit not of timidity, but of power and love and self-control.’ So go show the world every day that we can love God and love our neighbor at the same time. Our nation and our world needs it.”

After Pence shook each graduate's hand, he then met with the "I Like Mike" student supporters.

Muselman, after starting the campaign, got to end it on a high note, telling the vice president: "Taylor really does like you, Mike!"