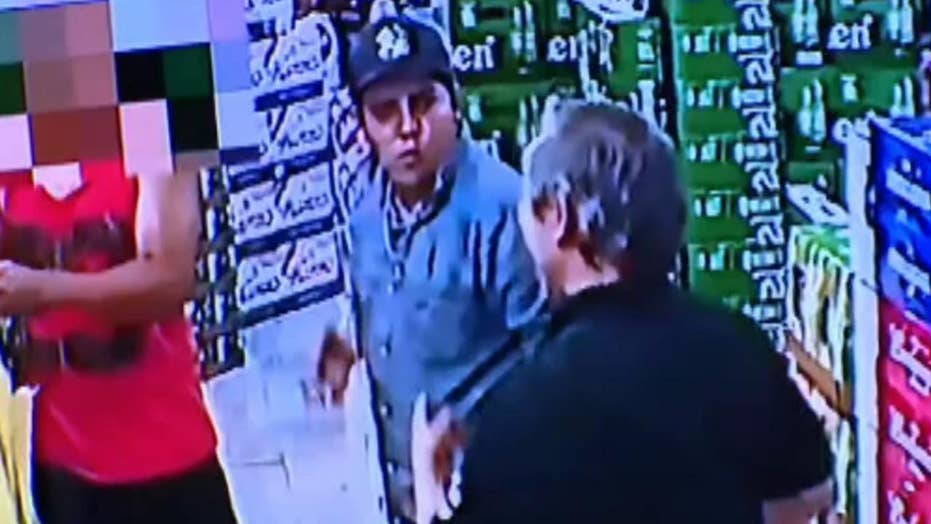 Pennsylvania store owner shot with his own gun

The man was shot after confronting a shoplifter.

A store owner in Pennsylvania remains hospitalized with a bullet lodged in his neck after narrowly escaping a confrontation with an illegal immigrant who used the man's own gun against him on Saturday, according to police.

The Upper Darby Police Department told FOX29 the shooting happened at 9 p.m. at Aaron's Beer Distributor, located just outside of Philadelphia. Earlier in the day, police said 24-year-old Pablo Quintanilla entered the store and stole three beers then left and returned at 9 p.m. – when he was confronted by the store owner, who punched him.

Quintanilla can then be seen on surveillance video knocking the owner down.

The owner's legally owned handgun then fell to the ground and Quintanilla grabbed it and pointed the weapon at its owner, police said. He fired at least four shots, according to Upper Darby Police Superintendent Michael Chitwood.

"The gun is grabbed by the bad guy, bad guy shoots him, fires at least four shots at him," Chitwood said during a news conference. "I don't know how he didn't kill him. He shot him point-blank."

Pablo Quintanilla, in the country illegally from Honduras, was previously deported in 2015, according to police. (Upper Darby Police)

Chitwood said that Quintanilla is an illegal immigrant from Honduras who was deported by federal border patrol agents in March 2015. Federal immigration officials have been notified about the arrest, and the 24-year-old is being held at the Delaware County prison.

"Some bad guy, some thug who's in here illegally, winds up shooting and almost killing you," Chitwood said at a news conference.

Police arrested Quintanilla on Monday after officials put out his picture from surveillance video and charged him with attempted murder.

"Some bad guy, some thug who's in here illegally, winds up shooting and almost killing you."

The son of the store owner, who asked to not be identified, told FOX29 his father is in stable condition, but still has a bullet lodged in his neck.

"Right now [my dad is] doing well—he's recovering," the son said. "Every day, you hope family comes home to you safely and unfortunately on Saturday that was not the case but he's recovering."