South Carolina to evacuate entire coast ahead of Florence

South Carolina residents have been ordered to evacuate from the coast as the state prepares for Hurricane Florence to make landfall later this week.

President Trump tweeted, "My people just informed me that this is one of the worst storms to hit the East Coast in many years. Also, looking like a direct hit on North Carolina, South Carolina and Virginia. Please be prepared, be careful and be SAFE!"

The president added he's spoken to McMaster, North Carolina Gov. Roy Cooper and Virginia Gov. Ralph Northam — all of whom have declared state of emergencies for their respective states -- ahead of the storm.

South Carolina's Department of Public Safety said they're "planning for a large-scale evacuation" as Florence, currently sustaining 140 mph winds as a Category 4 hurricane, is forecast to make landfall on the Carolina coast late Thursday.

The National Hurricane Center said during an earlier advisory on Monday that Florence has quickly intensified and could be potentially catastrophic.

This photo provided by NASA shows Hurricane Florence from the International Space Station on Monday, as it threatens the U.S. East Coast. (NASA via AP)

The storm, as of the Miami-based center's 5 p.m. advisory, is about 525 miles south-southeast of Bermuda and about 1,170 miles east-southeast of Cape Fear, North Carolina.

McMaster on Saturday declared a state of emergency ahead of the storm, and requested a federal declaration from Trump, which Trump approved late Monday.

North Carolina Gov. Roy Cooper — who issued a state of emergency last week — said Monday that the state is in the "bull's-eye" of the storm, and also requested a federal disaster declaration from Trump for resources to be prepared when Florence hits.

"The storm is still far away from the U.S. coast, but warm ocean waters will allow it to maintain its Category 4 strength, and winds are likely to climb to 150 mph."

Visitors and residents on Hatteras Island were ordered to evacuate, effective at noon on Monday. Officials in Dare County ordered a mandatory evacuation for people in other areas as of 7 a.m. Tuesday.

In the past 150 years, North Carolina has only been hit by one Category 4 hurricane — Hazel, which struck the state with 130 mph winds in 1954.

Hours after the mayor of Richmond, Virginia, declared a state of emergency on Monday ahead of potential "signficant rain and inland flooding later this week," Virginia Gov. Ralph Northam ordered evacuations for "the lowest-lying areas of Coastal Virginia and the Eastern Shore," effective at 8 a.m. on Tuesday.

Maryland Gov. Larry Hogan also declared a state of emergency, as officials "are preparing for any possible outcome, including the potential of historic, catastrophic, and life-threatening flooding in Maryland."

Fox News Meteorologist Adam Klotz said that while Florence "is still far away from the U.S. coast, warm ocean waters will allow it to maintain its Category 4 strength, and winds are likely to climb to 150 mph." 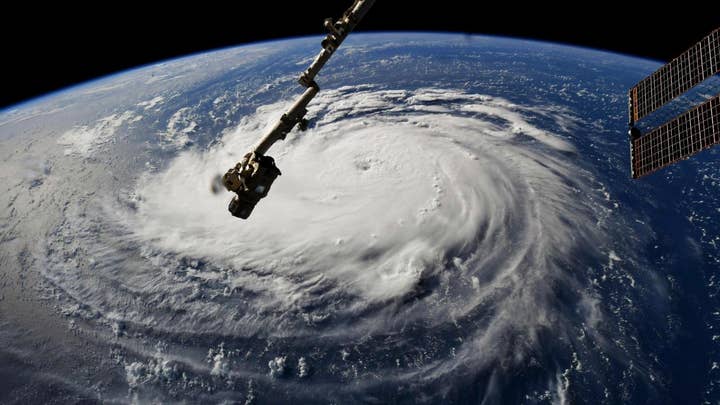 Meanwhile, two other storms were also spinning in the Atlantic by noon on Monday.

Hurricane Isaac was expected to lose strength as it reaches the Caribbean, and Helene, much farther out to sea, may veer northward into the open ocean as the 2018 hurricane season reaches its peak.