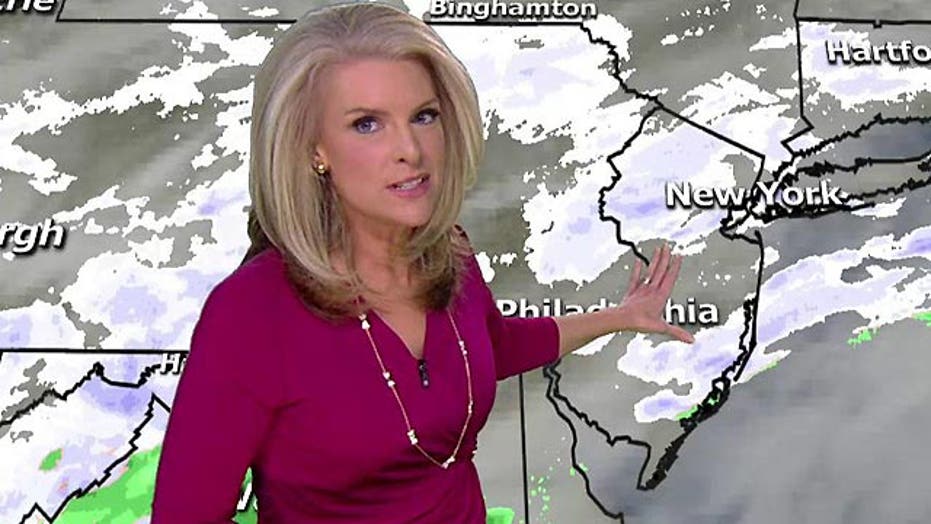 Blizzard could drop 2-4 inches of snow per hour

Tens of millions across the northeast and New England hunkered down Monday to ride out an historic blizzard, while power crews across the region anticipated massive outages amid hurricane-force winds and plunging temperatures.

Forecasters were predicting one to three feet of snow that promised to paralyze the region for days, with gusts blowing sideways with ever-increasing intensity in New York City by early evening, and flurries underway in Boston. The storm was predicted to build into a blizzard, and the brunt of it would hit late Monday and into Tuesday.

More than 6,500 flights in and out of the region -- home to 50 million people -- were canceled, and many of them may not take off again until Wednesday. New York City's subways and buses planned to shut down completely by 11 p.m., and commuter railroads across the Northeast also announced plans to stop running overnight. leaving workers to scramble to get home before roads became impassable.

Boston was expected to get 2 to 3 feet of snow, New York 1½ to 2 feet, and Philadelphia more than a foot.

The National Weather Service issued a blizzard warning for a 250-mile swath of the region, meaning heavy, blowing snow and potential whiteout conditions. Forecasters warned that the wind could gust to 75 mph or more along the Massachusetts coast, and up 50 mph farther inland.

"This will most likely be one of the largest blizzards in the history of New York City," said New York Mayor Bill de Blasio, who said the city had 250,000 tons of salt on hand and would have 40 percent more ambulances than usual ready to roll. He said all non-emergency vehicles would be banned from city streets from 11 p.m. until further notice.

"This will most likely be one of the largest blizzards in the history of New York City."

Authorities banned travel on all streets and highways in New York City and Long Island and warned that violators could be fined $300. Even food deliveries were off-limits on the streets of takeout-friendly Manhattan. The governors of Massachusetts, Connecticut and Rhode Island also slapped restrictions on nonessential travel.

"We learned the lesson the hard way," said New York Gov. Andrew Cuomo, referring to instances in which motorists got stranded in the snow for 24 hours or more.

Governors in five states -- New York, New Jersey, Connecticut, Massachusetts and New Hampshire -- declared emergencies and travel bans were being implemented on roads for Monday evening. Government offices closed. Shoppers stocking up on food jammed supermarkets and elbowed one another for what was left. Broadway stages went dark.

In Massachusetts, the town of Scituate told coastal residents to evacuate by 6 p.m. and said a shelter had been set up at the local high school.

Massachusetts Gov. Charlie Baker issued a ban, effective at midnight, on non-essential motor vehicle travel., The Boston Globe reported. The MBTA will close after midnight and will have no service on Tuesday.

Connecticut Gov. Dan Malloy issued a statewide travel ban beginning at 9 p.m. Monday when the storm is expected to be at its heaviest. Malloy told reporters Monday the blizzard could potentially be a record-setter and urged all residents to stay indoors. He said that if residents lose power, they will likely be without it for "several days."

"It is imperative that you have a plan in place to get home safely this evening before the heavy snow begins and remain there for the duration of the storm," Malloy said Monday morning.

In New York, Cuomo told reporters that crews were prepared with 750 plows and 50 pounds of salt to handle the snowfall, expected to reach as much as 18-24 inches. New York City subways will be restricted to limited service after 7 p.m. and Metro North and Long Island Railroad lines will be shut down after 11 p.m.

Throughout the area, road and utility crews were ready to plow and salt roads, as well as address possible power outages. John Latka, spokesman for PSE&G, which provides gas and electric service to much of New Jersey and parts of New York, called for patience from consumers in the event of outages.

“While snow by itself doesn’t normally pose a serious problem, heavy snow and strong winds can increase the possibility of downed wires and power outages,” Latka said. “These conditions will also make it difficult for our crews to get around and safely respond to any outages. We ask for our customers’ patience and cooperation as we work to restore service as quickly as possible.”

De Blasio held up a list of the city’s top 10 snowstorms and said this one could land at the top of a list that goes back to 1872 and includes the 26.9 inches that fell in 2006. "Don't underestimate this storm. Prepare for the worst," he said as he urged residents to plan to leave work early Monday.

"This could be a storm the likes of which we have never seen before," he said at a news conference Sunday.

Elsewhere in the region, Boston is expected to get 18 to 24 inches of snow, with up to 3 feet falling west of the city, and Philadelphia could see 14 to 18 inches, the weather service said. NWS lead forecaster Bob Oravec said that wind gusts of 75 mph or more are possible for coastal areas of Massachusetts, with gusts of up to 50 mph further inland.

"We do anticipate very heavy snowfall totals," Oravec, told The Associated Press. "In addition to heavy snow, with blizzard warnings, there's a big threat of high, damaging winds, and that will be increasing Monday into Tuesday. A lot of blowing, drifting and such."

One city likely to be spared large amounts of snowfall is Washington D.C., where forecasters expected only a coating or a bit more, with steadily increasing amounts as the storm moves north.

"Looks like our luck is about to run out," said John Paulsen as he gassed up his SUV in New Jersey. "I can't complain too much since we've had a pretty mild winter, but I don't know if I'm ready for a foot or so of snow all at once."

Preparations large and small were in effect elsewhere in New York. A Manhattan Home Depot store sold about twice as many shovels over the weekend as it normally does while transit officials hoping to keep the subways running smoothly planned to use modified subway cars loaded with de-icing fluid to spray the third rail that powers trains.

Wyatt Baars, manager of the Charlestown Ace Hardware in Boston, sold out of his bags of ice-melting pellets. But he said a New Hampshire distributor is helping him and delivering more.

"Everybody is preparing for the storm," he said. "When we have something this big on the horizon, everybody comes in for the ice melt, snow shovels, snow brooms."

Snow plow driver Al Laplant expected to be out clearing roads of Simsbury, Connecticut, this week, just as he has for more than two decades.

But even for a plow driver, the snow is no cakewalk.

At New York's Penn Station, Cicero Goncalves was waiting for a train to Vermont, where he's going snowboarding, because he expected the flight he had hoped to take would be canceled.

But the 34-year-old flight attendant from Queens — who was dressed in a full-length bear costume — counted himself and his travel partner as lucky. "We'll get there before it snows, and we're coming back when the storm is over, on Thursday," he said.

The storm could stall before it tracks out to sea, bringing high wind, heavy precipitation and the potential for coastal flooding, the National Weather Service said. It would be the second wallop for the Northeast after what happened Saturday, when a storm crawling up the East Coast left a slushy, snowy coating from Pennsylvania to New England.

The storm dumped at least 9 inches of snow in parts of Pennsylvania and 8 inches in parts of New York, northern New Jersey and northwestern Connecticut, with widespread reports of more than 4 inches in inland areas across southern New England. Lighter amounts were reported in Philadelphia, Boston and New York City, where the snowfall stopped Saturday evening.

About 8 inches of snow fell in far eastern Maine before the storm moved out late Saturday night.

Numerous accidents were reported on the slick roads, but there were no major highway backups in the lighter weekend traffic. Police in Connecticut and Massachusetts were investigating the weather's role in traffic accidents that killed two people Saturday afternoon.