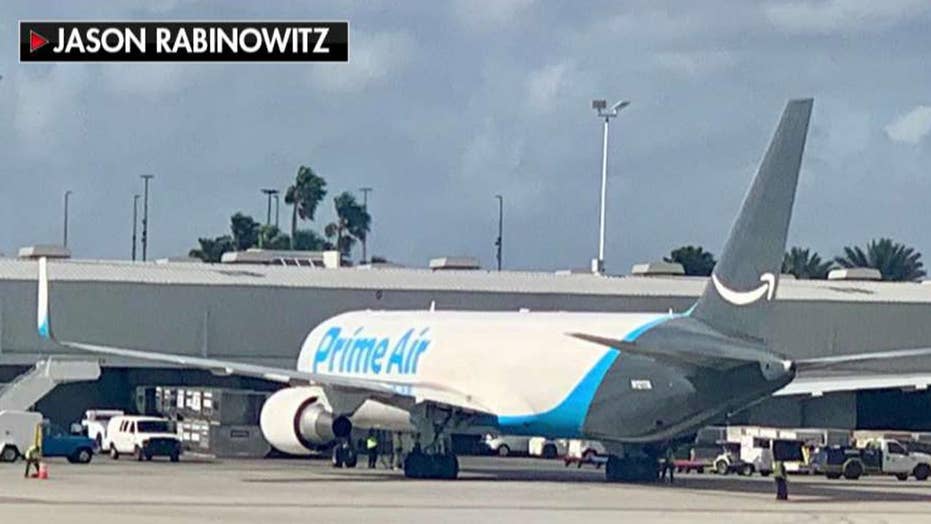 Officials said they recovered human remains and debris that includes women’s clothing and bedsheets from a Texas bay where a cargo jetliner operating for Amazon crashed minutes before it was set to arrive in Houston.

Federal aviation officials were investigating the scene around Trinity Bay near Anahuac on Saturday where the three crewmembers on board Atlas Air Flight 3591 were feared lost.

"Knowing what I saw, I don't believe anyone could have survived it," said Chambers County Sheriff Brian Hawthorne, who described the scene as “total devastation.” He said recovery efforts would resume Sunday.

"Knowing what I saw, I don't believe anyone could have survived it."

Local and federal officials gather at a staging area during the investigation of a plane crash in Trinity Bay in Anahuac, Texas, Saturday, Feb. 23, 2019. (Brett Coomer/Houston Chronicle via AP)

The twin-engine Boeing 767 contracted by Amazon plunged from the sky minutes before it was expected to arrive at George Bush International Airport, the Houston Chronicle reported. The aircraft was part of the Amazon Prime Air Fleet and was traveling from Miami to Houston. It had been at Ontario International Airport in California earlier in the day, the Press-Enterprise of Riverside reported.

Witnesses said they heard the plane sputtering before it “went in nose first” around 12:40 p.m., leaving a half-mile of debris along the shallow bay.

The Federal Aviation Administration lost contact with the airliner when it was 30 miles southeast of the airport, according to the paper.

“I would venture to say that it’s probably going to be mechanical," Hawthorne said of a possible cause.

In a statement, Amazon said its "thoughts and prayers are with the flight crew, their families and friends along with the entire team at Atlas Air during this terrible tragedy. We appreciate the first responders who worked urgently to provide support."

A helicopter flies overhead as emergency personnel work the scene of a plane crash site in Trinity Bay in Anahuac, Texas on Saturday, Feb. 23, 2019. (Brett Coomer/Houston Chronicle via AP)

Multiple agencies responded to the crash site. The shallow bay and surrounding marsh present challenges for responders, said Brian Ligon, a spokesman for the city of Mont Belvieu.

"I've been out there on a boat a few times where you're basically boating on dry sand and then just a few feet from there it's super deep," Ligon said.

The Coast Guard dispatched boats and at least one helicopter to assist in recovery efforts. The National Transportation Safety Board is heading the investigation.

The Associated Press and Fox News reporter Paulina Dedaj contributed to this report.