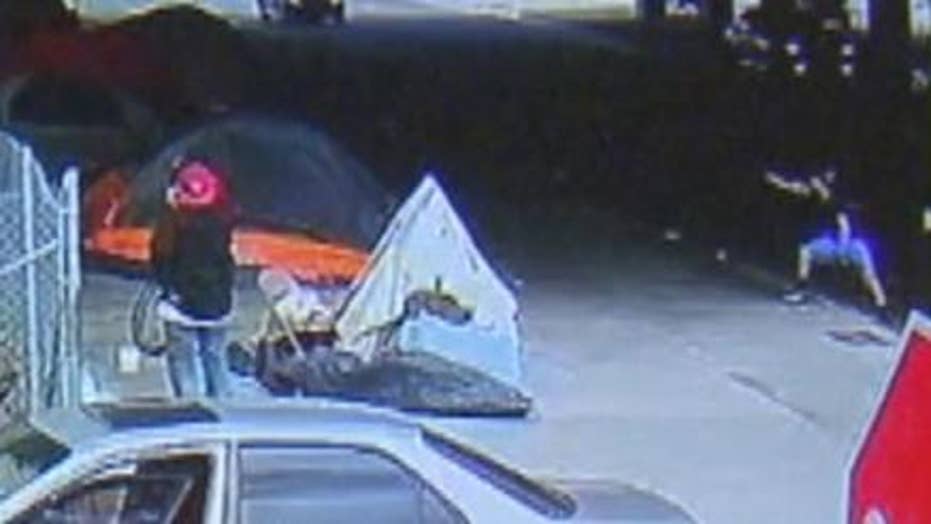 Authorities in Los Angeles are investigating a targeted shooting at a homeless encampment that left one man injured -- and was captured on stunning surveillance video released Tuesday.

The Los Angeles Police Department said in a news release the shooting took place on July 26 just after 3 p.m. in the city's Venice neighborhood under a freeway overpass.

In the video, the driver of a Honda Accord gets out of the vehicle and runs to the sidewalk where three men are gathered near tents. The man then gets a handgun from his shorts and fires "multiple rounds" at one of the three men, according to the LAPD. A passenger in the Honda can be seen getting out of the car and walking toward tents before pointing the gun towards a man.

The gunman and passenger then run back into the car and drive away, according to police. The victim was transported to an area hospital in stable condition.

SAN FRANCISCO CONTINUES TO SPEND BIG IN FIGHT AGAINST HOMELESSNESS -- BUT IS IT WORKING?

Residents who live near the encampment under the 405 Freeway and Venice Boulevard told ABC7 it's impacting their quality of life.