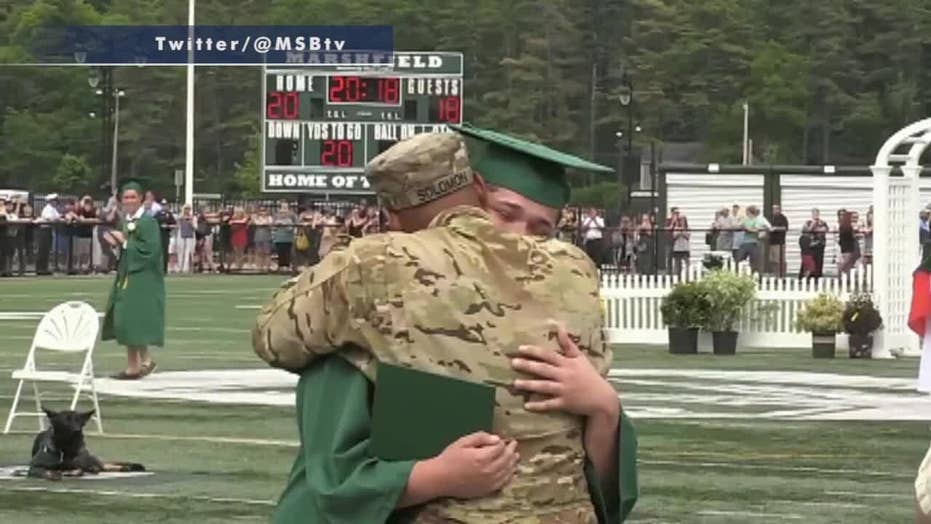 High school graduate Tyler Solomon is surprised by his father after deployment.

A Massachusetts high school student was in for the surprise of a lifetime when his father — an Army sergeant deployed overseas — surprised him at his graduation on Saturday.

Tyler Solomon, a student at Marshfield High School, walked across the stage on the school's football field as his name was called, and received his diploma.

Suddenly, the ceremony's announcer stopped the proceedings — and introduced the grad's father, Sgt. Damon Solomon, to the crowd.

To a roar of cheers, Tyler and Damon walked toward each other for an emotional embrace. The two received a standing ovation from graduates and guests, as photographers circled around to capture the special moment.

"The entire Solomon family had no idea he would be there until he appeared on the field," the school's student broadcasting group tweeted about the heartfelt reunion.

Tyler told CBS News on Sunday he "had no idea" his father was in attendance at the ceremony, and Damon added that "the expression on [his son's] face was amazing. The shock, the emotion, the tears."

Damon, who's reportedly been in the Army for 18 years, said he wants people to understand that his deployment — which he said is his fifth — is "for the greater good. "

"It hurts, but there are moments, moments like these," he said.