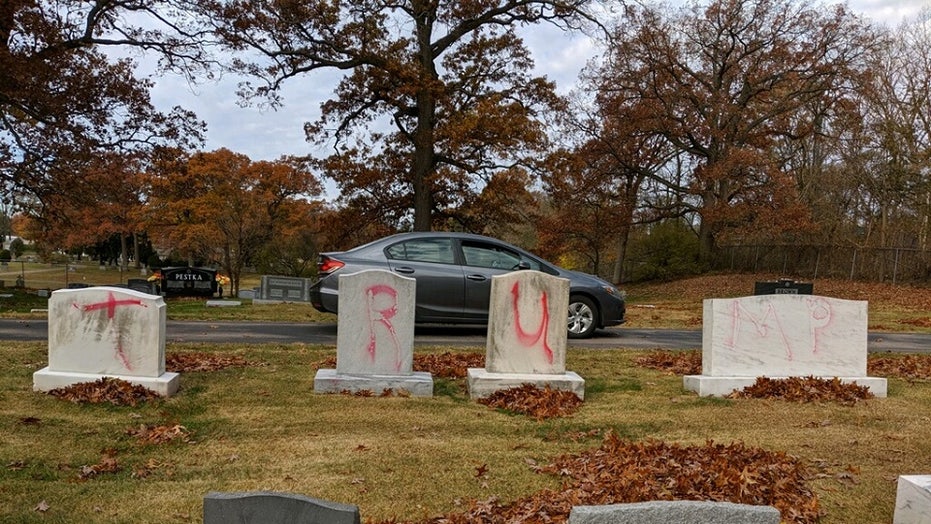 Several headstones at a Jewish cemetery in Grand Rapids, Mich., were found vandalized with pro-Trump slogans a day before the president closes out his last campaign blitz in the city.

Images of the headstones at the cemetery owned by the Congregation Ahavas Israel showed multiple stone slabs each spray-painted with a letter to spell out "Trump" and "MAGA," referring to "Make America Great Again," Trump's 2016 campaign slogan. It was not clear how many stones were vandalized.

"This is the main cemetery for Jewish people in the city of Grand Rapids," Noah Arbit, founding chair of the Michigan Democratic Jewish Caucus, told Fox News.

The desecrated stones were discovered by a community resident, he said.

"We don't see any of the normal symbols like a swastika... or anti-Semitic rhetoric," she told Fox News. "So I can't draw any conclusions. All we know is graves were desecrated in a Jewish cemetery.

"Some of the graves were very, very old," Normandin added. "These people need to be laid to rest. Their graves should not be disturbed. Normal people don't do this kind of thing. It's disgusting. It's vile."

Rabbi David Krishef told Fox News the 125-member congregation has never been targeted in the past and that the incident may have just been "opportunistic vandalism" that occurred on Halloween weekend and "not an attack against the Jewish community."

Jewish headstones were found desecrated with "MAGA" inside a Grand Rapids, Mich., Jewish cemetery. (Courtesy of the Anti-Defamation League Michigan)

Local authorities have been notified, he said. Calls and messages to the Anti-Defamation League Michigan were not immediately returned.

The vandalism occurred a day before Trump is scheduled to appear at an election night rally in Grand Rapids to close out his 2020 re-election campaign. Michigan is a swing state that Trump and his Democratic rival Joe Biden have targeted.

In a tweet, the Michigan Democratic Jewish Caucus blamed Trump over his failure to condemn White supremacists on several occasions.

He "has sided with antisemites, white supremacists, racists, and bigots of all kinds," the group said. "Now, our country is paying the price. Tomorrow, we will end it."