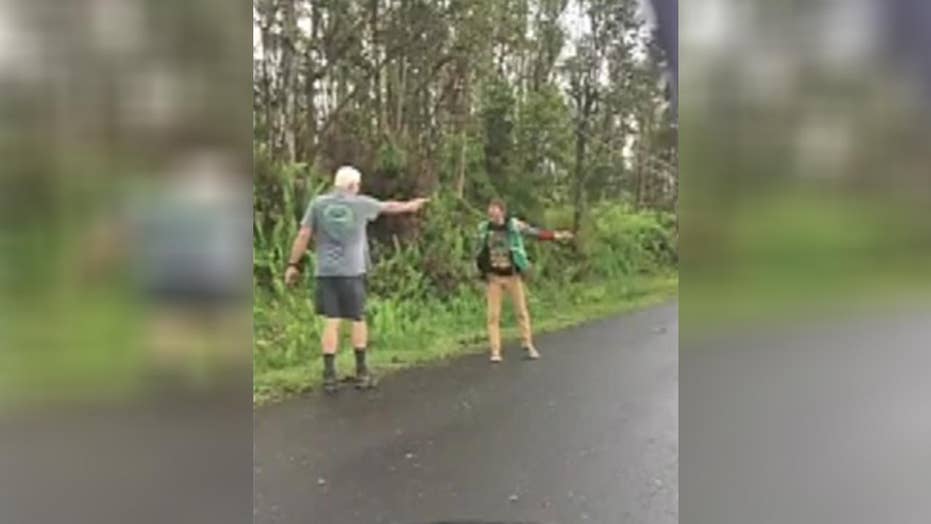 Police arrest man in connection with shooting in Hawaii

Suspect pointed and fired at another man in the Leilani Estates neighborhood.

Tensions from the nearly month-long eruption of Hawaii's Kilauea volcano appeared to have boiled when a man was arrested Tuesday after firing a gun during a confrontation in a neighborhood near an ongoing lava flow.

The incident in the Leilani Estates subdivision happened after 12:20 p.m. when a resident surveying the area of his former home with a group of people, which was destroyed by lava, was approached by 61-year-old John Hubbard in his pickup truck, Hawaii Police said in a news release.

The resident told authorities that Hubbard assaulted him, then pointed a gun at him and demanded the group leave the area immediately.

"During the argument, the suspect fired several shots from a handgun," police said. "No one was injured by gunfire, and the victim sustained non-life-threatening injuries stemming from the assault."

Police arrested Hubbard, also of Leilani Estates, near the scene without incident. He is now facing a first-degree charge of reckless endangering, according to police.

While police did not name the victim, a video posted to Facebook by Ethan Edwards shows the encounter, including the gun shots that Hubbard fired into the air.

"This was my yesterday. Happy to be alive," Edwards wrote in a Facebook post. "Be careful out there folks. This situation is really beginning to take its toll psychologically and the bad weather is contributing to emotional tensions. Folks are breaking down"

Hawaii County Civil Defense Administrator Talmadge Magno told Hawaii News Now that that tensions were high in the neighborhood, where at least 75 homes have already been destroyed.

"They've got this live volcano in their backyard," Magno said. "They feel like, they see strange people in their subdivision, whether it's people just wanted to go see lava or criminals, and they try to protect stuff."

Magno added that there is "a lot of stress" right now" in the area, and for those that have not evacuated are experiencing a "hard time."

"I could see it coming, I know it's something that happens in a lot of disasters, whether it's in the shelters or in the communities, a lot of stress, a lot of things are going on there" he told Hawaii News Now.

Earlier this month, two residents were arrested for attempting to blow past police barricades to enter the area, according to the news outlet. On May 9, police arrested a man for allegedly attempting to burglarize a Leilani Estates home just days after eruptions began.

The U.S. Geological Survey told the Associated Press the lava was moving fast enough Wednesday night to cover about six football fields an hour. There are now a total number of 24 cracks spouting lava since the volcano began erupting on May 3, Hawaii County Civil Defense sad.

HAWAII VOLCANO ERUPTION: HOW MANY PEOPLE ARE KILLED BY VOLCANOES?

Hawaii County officials said lava destroyed the electric utility's equipment on the highway, which knocked out power to Vacationland and Kapoho Beach Lots.

"You are at risk of being isolated due to possible lava inundation," the Hawaii County Civil Defense agency advised the public.

This Tuesday, May 29, 2018 photo provided by the U.S. Geological Survey shows what is known as tephra, airborne lava fragments, erupted by the high lava fountains of fissure 8 was carried downwind, where the frothy rock fragments fell on Leilani Street, just past Kupono Street, in the Leilani Estates subdivision. (U.S. Geological Survey)

Strands of volcanic glass called as Pele's hair was accumulating on the ground in Leilani Estates and surrounding neighborhoods, and winds may blow lighter particles farther away, scientists said. The strands can cause irritation and respiratory problems when it comes in contact with people.