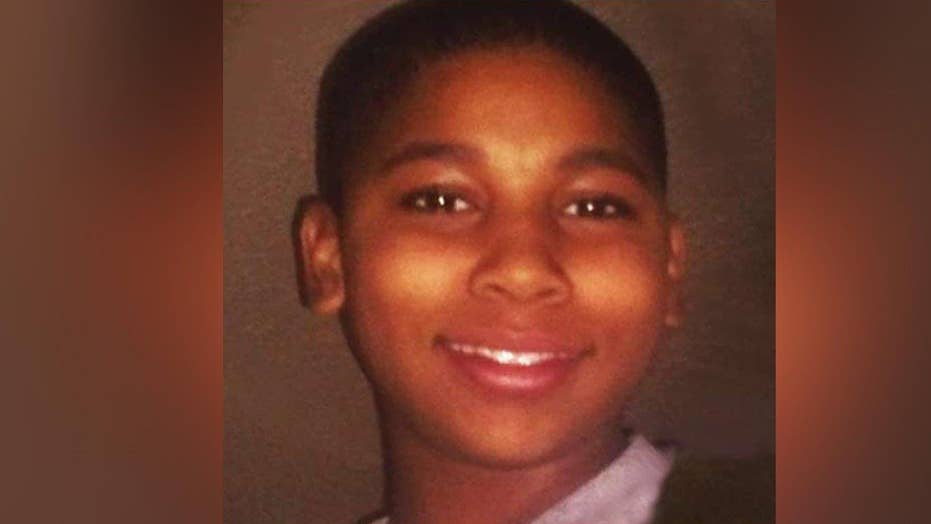 Officers will not face charges in the death of Tamir Rice

Prosecutor calls the incident a 'perfect storm of human error'

A white police officer who shot and killed a black 12-year-old carrying a pellet gun in November 2014 will not be indicted, an Ohio prosecutor announced Monday.

Cuyahoga County Prosecutor Timothy J. McGinty said a grand jury declined to charge a Cleveland police officer or his partner in the death of Tamir Rice. The grand jury had been meeting since mid-October.

Surveillance video of the shooting showed patrolman Timothy Loehmann, a rookie at the time, shooting Rice as the cruiser driven by patrolman Frank Garmback skidded to a stop on Nov. 22, 2014. Rice died the next day during surgery.

McGinty called the episode "a perfect storm of human error," but said no crime was committed.

When he was shot, Rice was carrying a plastic airsoft gun that fired nonlethal plastic projectiles and was a replica of an actual firearm. He had borrowed it that morning from a friend who warned him to be careful because the gun looked real.

McGinty said it was "indisputable" that Rice drew the weapon as the officer who shot him approached.

A short, grainy video previously released of the encounter between Rice and the police could be misleading, officials at the news conference said.

Meyer showed magnified frames of Rice in the hours before the shooting, repeatedly pulling the gun out from his pants and pointing it at other people in the recreation center, sometimes at a close range. A witness who had been standing with Rice earlier in the day told authorities that Rice was pulling the gun out "like robbers do."

At one point during the news conference, Meyer held the model of Rice's airsoft gun alongside a real weapon the pellet gun was modeled after.

"To someone who is in a stressful encounter, however, who doesn't know if the gun is real or fake, it is impossible to tell," Meyer said.

Meyer said prosecutors reccomended to the grand jury that no charges be filed in the case because they did not believe that "any reasonable judge or jury would find criminal conduct."

None of the prosecutors took questions during Monday's news conference.

On the day Rice was shot, a man waiting for a bus outside a
recreation center called 911 to report that a man was waving a gun and pointing it at people.

The man told the 911 operator that the person holding the gun was likely a juvenile and that the gun probably wasn't real. The operator never passed that information to the dispatcher who gave Loehmann and Garmback the high-priority call.

When the cruiser arrived, the vehicle skidded on wet grass and stopped within feet of the boy. Authorities say Loehmann shot Rice less than 2 seconds after opening the cruiser door.

The officers said they repeatedly yelled at Tamir to put his hands up, although investigators found no evidence of that. Garmback said the windows of the cruiser were rolled up.

In the video, Rice walked toward the cruiser as it moved toward him.

After Loehmann shot him, the boy lay unattended for about 4 minutes until an FBI agent who was a trained paramedic arrived and began administering first aid.

The grand jury decision comes more than a year after Rice's death, and his family has repeatedly questioned why the case has dragged on.

“While we will always have the utmost respect for the criminal justice system, we are pleased in the Grand Jury’s thoughtful decision based on the facts of this tragic case,” said Cleveland Police Patrolmen’s Association President Steve Loomis in a statement.

Subodh Chandra, a Cleveland attorney who represents the Rice family in a federal civil rights lawsuit over the shooting, said he had braced himself for the news that the officers, both white, wouldn't be indicted.

"This is apparently how long it takes to engineer denying justice to a family when the video of the incident clearly illustrates probable cause to charge the officer," Chandra said.

Unlike criminal trials, in which prosecutors must prove guilt beyond a reasonable doubt for a conviction, the burden of proof for an indictment is much lower. The grand jury would have had to decide only that a crime might have been committed to indict the officers.

Grand jury proceedings are supposed to be secret, but McGinty has released expert reports and investigative documents to the media and public while citing his desire for transparency in how the case is being handled.