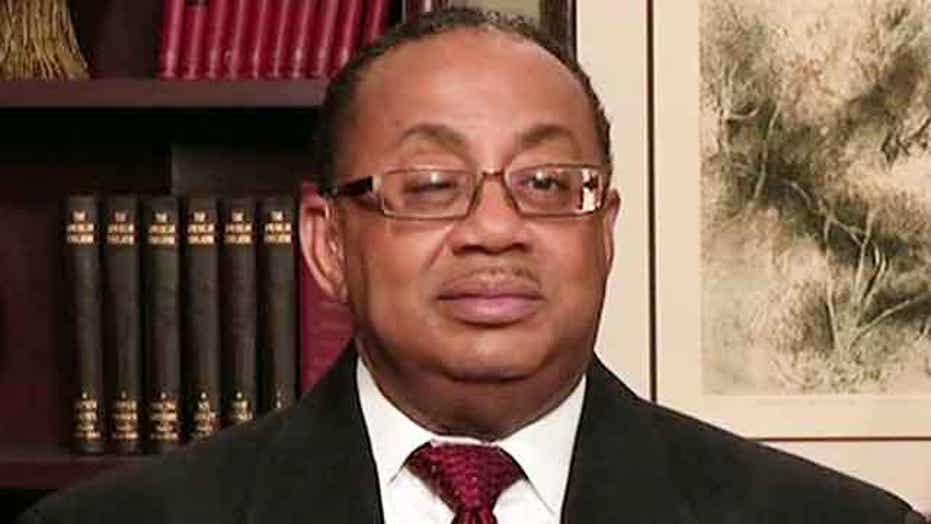 Judge whose forged signature led to prison break speaks out

So the guards at Franklin Correctional Institution put one of the men on a bus and opened the gates for the other to ride away with family. Authorities now say prison officials were duped by the court documents, which included a fake motion from a prosecutor and a judge's forged signature.

The release led to a manhunt across Central Florida, but the inmates have a significant head start. Joseph Jenkins was let out Sept. 27, and Charles Walker was freed Oct. 8. Both are 34.

Chief Circuit Judge Belvin Perry said Thursday there were several red flags that should have attracted attention from the court clerk's office or the Corrections Department. Namely, it's rare for a judge to order a sentencing reduction, and even more uncommon for the request to come from prosecutors.

"One of the things we have never taken a close look at is the verification of a particular document to make sure it's the real McCoy," said Perry, whose name was forged on the paperwork. "I knew that that was always a possibility, but you never want that possibility occurring in the way that it did."

It wasn't clear exactly who wrote the paperwork or how authorities discovered the error. Local, state and prison officials were searching for the men.

"These two individuals are out. They shouldn't be, and we want to get them back in custody," Orange County Sheriff's Office spokesman Angelo Nieves said.

Jenkins was found guilty of first-degree murder in the 1998 killing of an Orlando man. Jenkins and his cousin were convicted in the shooting death of Roscoe Pugh in a botched robbery.

Upon hearing of Jenkins' release, his former attorney, Bob Wesley, said he was sure "it wasn't a cunning master plan."

Wesley, now the public defender for metro Orlando, recalled his client's crime and said Jenkins broke into a home of someone he knew and was "not smart enough to pull his ski mask down."

Jenkins' cousin Angelo Pearson was also sentenced to life and is serving time at a different Florida prison.

Walker was convicted of second-degree murder in a 1999 slaying in Orange County. He told investigators that 23-year-old Cedric Slater was bullying him and he fired three shots intending to scare him.

Department of Corrections spokeswoman Misty Cash didn't know which man had been dropped off at the bus station, but said prison officials routinely work with inmates who are getting out.

"If they need a bus ticket, we'll provide that for them," she said.

In a statement, Corrections Secretary Michael Crews said his agency was reviewing records to make sure no other inmates had been released in a similar fashion. The agency said in a statement later Thursday it verified the prisoners' release information with the clerk's office, though it said this could have been done by checking the court's website or contacting the office directly. The statement didn't say which one the agency did.

"This is unconscionable, almost unthinkable," said Rouson, a St. Petersburg lawyer. "People have faith in government that will keep the peace and justice."

Republican Gov. Rick Scott said once the men are apprehended, he will focus on making sure it doesn't happen again.

"The first thing you do when something like this happens is solve the problem you have at hand," he said. "We need to apprehend these individuals and that's what we're doing."

In both cases, the forged paperwork included motions from an Orlando prosecutor to correct "illegal" sentences, accompanied by orders filed by Perry within the last couple of months granting a 15-year sentence. Perry is best known for presiding over the Casey Anthony murder trial in 2011.

Leesa Bainbridge, a spokeswoman for the Orange County Clerk of Courts, said the office moves thousands of pages of court documents a day and currently has no way of authenticating those that pass through to other agencies.

"We're kind of like the post office," Bainbridge said. "It comes in and we move it along."

Bainbridge said officials in the clerk's office plan to talk about what measures, if any, can be put in place to make sure something similar doesn't happen again.

"This is something we take very seriously," she said. "We don't find this funny."

Perry said changing the type of paper orders are printed on or requiring a phone call to the judge's office when an order involves sentencing could help.

Newer, more technologically advanced measures may have to be implemented as Florida's court system finishes transitioning into a paperless system, he said.

"I think this will open that discussion," Perry said.