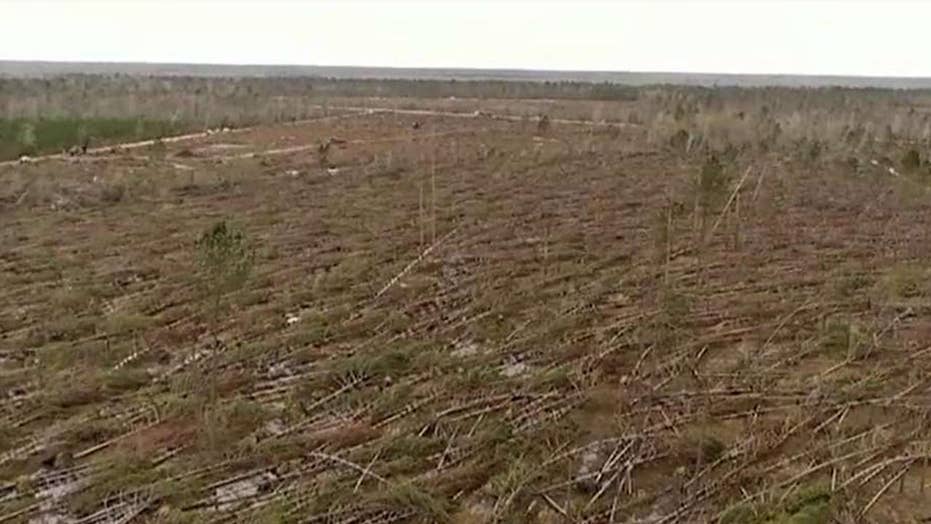 BLOUNTSTOWN, Fla. - Fifth-generation timber farmer Will Leonard and his wife, Morgan, found out they were pregnant with their first child one week before Hurricane Michael unleashed its Category 5-force winds on their home in the Florida Panhandle, snapping Leonard’s trees like matchsticks and wiping out hundreds of acres of his decades-old timber.

“To see what my great grandfather, my grandfather, my father and my brother and I have worked towards destroyed in the matter of three and a half hours was a shock and then that gave way to grief,” Leonard said.

More than eight months later, Leonard is hoping his now four-week-old son, Mac, will one day carry on his family legacy if he manages to keep the business afloat during its darkest time.

His land was just a fraction of the nearly 3 million acres of timberland across almost a dozen counties in the Panhandle flattened by Michael, causing over $1 billion in economic losses statewide from the devastation across one of the state’s poorest regions.

“I went to Iraq…and it's the closest thing to a war zone that I've seen…I've been practicing forestry for 38 years and virtually anything I did in 38 years is gone or very drastically modified,” said timber farmer Philip McMillan, who manages 46 acres of land in Blountstown.

The Florida Forest Service estimates that Michael left 72 million tons of rotting timber on the ground, enough to fill 2.5 million log trucks, which would wrap around the earth 3.5 times. (Fox News)

The Florida Forest Service estimates that Michael left roughly 72 million tons of rotting timber on the ground. About 13 percent has been cleared in what is expected to be a five to seven-year effort.

On June 6, President Trump signed a federal aid package worth billions for recovery from catastrophic disasters, allotting nearly $500 million to help timber farmers in the Florida Panhandle. The package covers 75 percent of the damage, recovery and reforestation costs, leaving farmers responsible for the remaining 25 percent. But after living through the worst storm to ever strike the Panhandle, some farmers are already fighting for economic survival.

“It is very much needed and appreciated, but there are many in the area that simply will not have the 25 percent match that's required to move forward with these federal programs… So many are left with very tough decisions moving forward,” said Alan Shelby, executive vice president of The Florida Forestry Association. “Not only had they not gotten paid for last year’s crop, now they don't have any seed money to reforest or to clean it up. To add insult to injury, the clean-up of that land is in excess of $2,000 per acre in some areas. In many cases, $2,000 an acre is more than the land is worth itself.”

“This is 60 years-worth of work and effort that was destroyed in about three and a half hours," said timber farmer Will Leonard. (Fox News/Allie Raffa)

Farmers say they need the relief regardless of how much, but wonder why it has taken so long.

Florida Agriculture Commissioner Nikki Fried said partisan politics in Washington is to blame, but that the money is on its way to those who need it most.

“Timber is not considered a traditional crop which means there's no crop insurance…We're hoping that the money goes smoothly…and that we're able to streamline this as fast as possible,” she said.

But time is running out for “the wood basket of the southeast” and its generational crop. Florida has more than 17 million acres of forestland, mostly in the northern half of the state. Timber employs about 120,000 people and contributes $25 billion to the state’s economy, according to the Florida Forestry Association.

“People lost their 401K’s, their investments for their kids and grandkid’s college funds…this land went from being an asset building worth to a liability they can no longer handle,” said Shelby.

With each passing day, the downed trees lose more value and eventually become unusable altogether. Farmers hope to get a quarter of the wood’s cost before it goes bad and isn’t worth the cost to remove it.

Rot and insect infestation have overtaken the 72 million tons of broken trees left after the storm, and farmers have roughly two months of viability left before they’re too far gone to sell.

“With the amount of bugs that are coming to feast on all of the dead decaying material here, there is a really good chance that you'll lose the green trees that are still standing as well…it's a vicious cycle,” Leonard said.

And that’s not all farmers have to worry about—growing concerns over a wildfire threat plague those who can’t clear their downed trees quickly enough, as the slow-going cleanup process continues into the sweltering summer months. Several wildfires have already had to be extinguished before becoming widespread.

"The Florida Forest Service has estimated our fire fuel load in danger to be five times that of California…because of the amount of dead woody material that's on the ground...,” said Leonard.

But despite all the hardship, Leonard says he won’t let Hurricane Michael become the Panhandle’s enduring legacy, but hopes the next generation of timber farmers will be.

“My hope would be…that [Mac] would have an opportunity to be involved in the timber industry and have the same multigenerational connection…that I've had,” he said.

Even with the new federal aid, it’s expected to take over a decade for the state’s hurricane-ravaged timber industry to recover from the devastation Michael left.