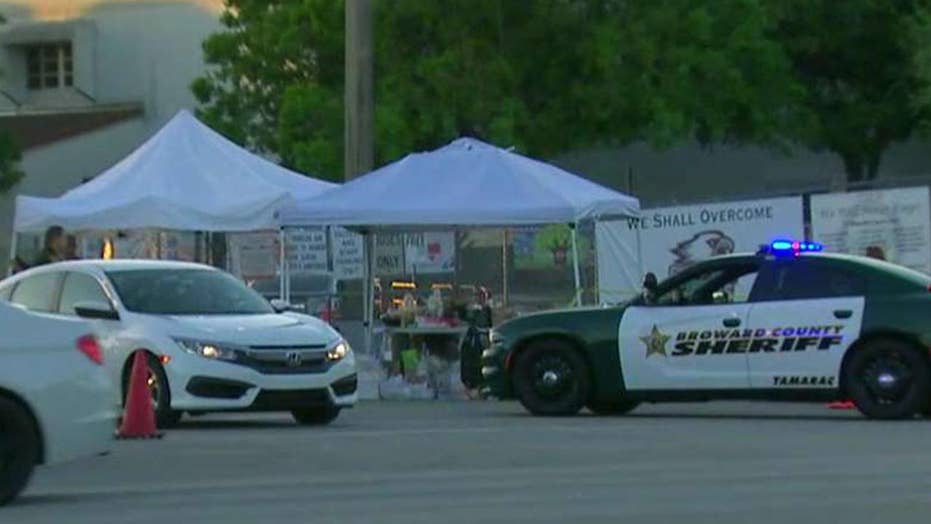 Students return to Stoneman Douglas ahead of reopening

The students attended a voluntary orientation before the official reopening on Wednesday.

For the first time since 17 people were killed on their school campus on Valentine’s Day, students, parents and teachers made an emotional return Sunday for a voluntary orientation at Marjory Stoneman Douglas High School in Parkland, Florida.

The thousands of students returned to a campus covered in signs, balloons, flowers and memorials honoring their classmates, teachers and friends who were shot in one of the deadliest massacres in modern U.S. history.

Seventeen people dressed as angels stand Sunday, Feb. 25, 2018, at the memorial outside Marjory Stoneman Douglas High School in Parkland, Fla., for those killed in a shooting on Feb. 14. (AP Photo/Terry Spencer)

Members of the Stoneman Douglas community who are scheduled to meet with administrators to discuss the school’s reopening — planned for Wednesday — appear to have mixed emotions upon their return.

Mikayla Strabitz, while set on “making a change,” told WSVN she’s “scared to go back.”

“I don’t know if I could feel safe again in a school like that,” Strabitz said. “Especially knowing there are so many entrances to that school and not knowing how Nikolas Cruz got in, that’s one scary thing.”

The student said she doesn’t expect everyone to return to campus right away, “just because I know a lot of people were in the freshman building, so going back and not being able to go to those classes, seeing their classmates is going to hit them.”

Parents and students arrive at Marjory Stoneman Douglas High School for an open house on Sunday, Feb. 25, 2018, in Parkland, Fla., as parents and students returned to the school for the first time since over a dozen were killed on Feb. 14. (David Santiago/Miami Herald via AP)

During his return to Stoneman Douglas on Sunday, Liam Kiernan, 15, brought his father to the band room closet where he hid as the shooting occurred.

“I walked in and showed him, that’s where I was,” Kiernan told the Miami Herald. His father, David, told the newspaper, his voice breaking: “It was tough. So tough.”

In addition to showing his father the fateful spot where he hid as more than 30 others were shot, Liam said he saw the teacher who saved his life and “gave him a big hug. That was definitely a moment.”

Another student, 16-year-old Janna Volz, told the Herald that while “it was still nerve wracking” to be back on campus Sunday, she’s ready to make it back to school.

Teacher Jim Gard, who told Fox News in the wake of the Feb. 14 massacre that the gunman was his math student, said that he’s “anxious” to return to his school.

Mourners pay tribute at a memorial for the victims of the shooting at Marjory Stoneman Douglas High School on Sunday, Feb. 25, 2018, in Parkland, Fla. (David Santiago/Miami Herald via AP)

"I am going to come back strong with my friends and show that we love each other so much and we are going to get through this," Brown, who was in the building where the shooting took place, said.