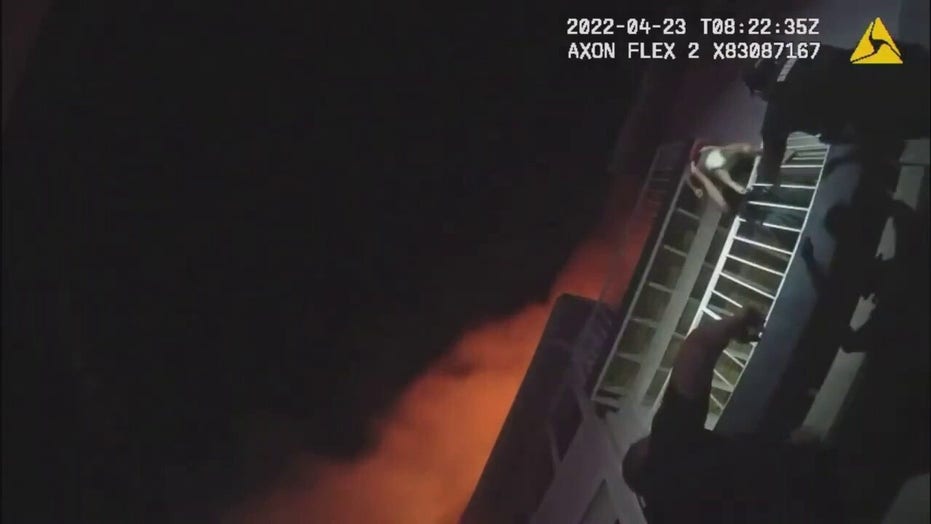 A Florida sheriff’s office has released dramatic bodycam video showing a heroic deputy climb a three-story apartment building to rescue a baby during a fire over the weekend.

A Florida mom has thanked the quick-thinking deputy who climbed the outside of a three-story apartment building to rescue her two-year-old daughter during a fire over the weekend.

Barbara Elemus and her daughter Sophia met with Orange County Sheriff’s Deputy William Puzynski on Tuesday and thanked him for his heroic actions, FOX35 Orlando reported.

"I want to that him so much because, without him, me and my daughter might not be here," Elemus told the station. "And my sister might not be there. He showed my kids something positive that he was willing to risk his own life and fall down three flights of stairs just to save us."

The sheriff's office posted photos of the reunion between Elemus, her children and Orange County deputies on its Facebook page.

"It was a joyful meeting, with tears & hugs & laughs - and lots of toys and supplies for mom & kids!" the sheriff's office wrote.

Puzynski’s bodycam shows him scale to the second-floor balcony and the mother hand him her daughter from the floor above. Puzynski then lowers the baby to other deputies on the ground.

Three residents were injured during the fire, according to fire officials. The sheriff's office said there were no casualties and no deputies were injured.

Elemus told the station that she and her four kids are staying a hotel in Orlando after losing everything in the fire.

To help the family during their displacement, the station reported that the sheriff’s office gave her kids toys, gift cards and some clothes.