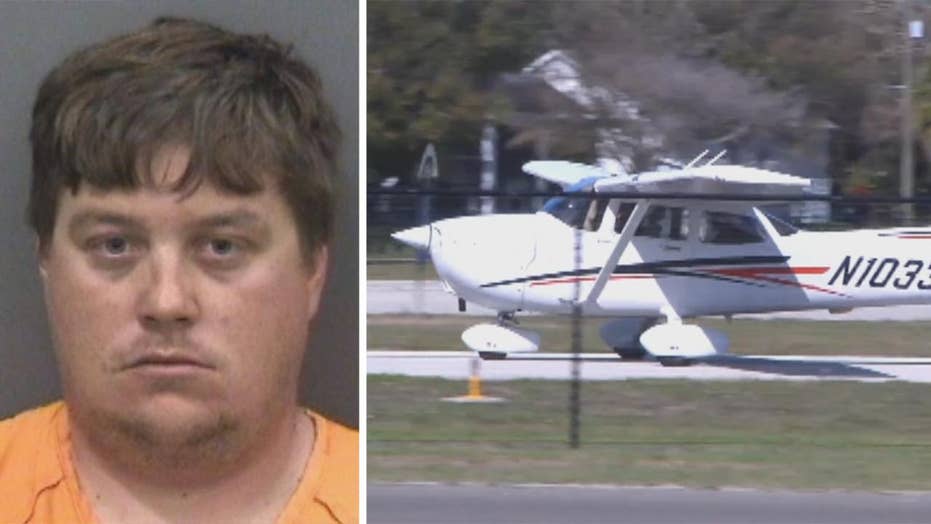 A Florida man’s adventure after a “falling out” with his girlfriend made for one memorable Saturday night at Tampa’s Peter O. Knight Airport.

Drew Bronnenberg, 28, is accused of stripping down to his blue shorts, attempting to steal two planes before giving up and taking a joy ride in a golf cart and airport fuel truck before crashing into a building, FOX13 reported on Tuesday.

"He had some sort of a falling out with his girlfriend and just start walking,” Tampa police department spokesman Steve Hegarty said.

Bronnenberg was at the 2018 Gasparilla Pirate Festival in Tampa when he left, walked several miles to the airport and took off his clothes, aside for his blue shorts. He then hopped a fence to enter the airport, pulled a single-engine plane out of the hanger and attempted to get it up in the air.

But Bronnenberg, who doesn’t have a pilot’s license, hit a roadblock when he couldn’t get the plane to start.

"He got a fire extinguisher and unloaded it on one of the planes,” Hegarty said.

He then tried to steal another plane before giving up on that attempt, too. He jumped in a golf cart, took a joyride before ditching it for an airport fuel truck. He took a spin in the vehicle before ultimately crashing it into a building, according to FOX13.

Bronnenberg was arrested and faces 11 charges including burglary, criminal mischief and grand theft. He also told police he didn’t remember his 20-minute episode at the airport.

He was released on bond Sunday.

The Hillsborough County Aviation Authority, who owns Peter O. Knight Airport, said in a statement to FOX13 that “safety and security are top priorities.”

“We have a robust program at Peter O. Knight that includes daily inspections of security fencing and access points. We also make regular upgrades to our security system,” the statement added.