Joe Smitha of Palm Harbor, Fla., speaks with reporters on Saturday, March 17, 2018, about his niece, Alexa Duran, whose family has identified her as one of at least six victims of a bridge collapse near the Florida International University campus in the Miami area on March 15. (Associated Press)

The uncle of one of the victims of Thursday's bridge collapse in Miami blasted what he called the "complete incompetence" and "colossal failure" of the decision to allow people to drive under the bridge while it was still under construction.

"Why they had to build this monstrosity in the first place to get children across the street?" said Joe Smitha, whose niece, Alexa Duran, 18, was among those killed. "Then they decided to stress test this bridge while traffic was running underneath it?"

"Why they had to build this monstrosity in the first place to get children across the street? Then they decided to stress test this bridge while traffic was running underneath it?"

Smitha spoke Saturday as crews worked to recover the last of the victims crushed by 950 tons of debris when the bridge fell Thursday afternoon.

Police in Miami say they have now recovered all six victims from the collapse of a planned pedestrian bridge that was to connect Florida International university to the city of Sweetwater.

“We finally got the last victim out,” Miami-Dade police Director Juan Perez said at an evening news conference, adding that the identities of the final two victims had not yet been confirmed.

The cause of the bridge failure is still being investigated, including by officials from the National Transportation Safety Board. 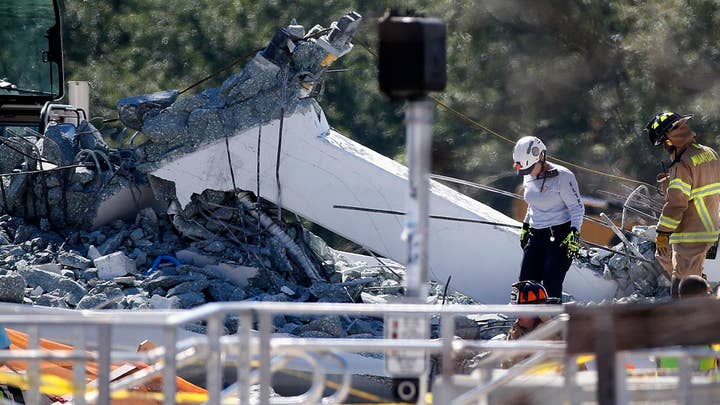 The NTSB has confirmed that crews were applying what's known as "post-tensioning force" on the bridge before the failure. Authorities are investigating whether cracking that was reported just before the span fell contributed to the accident.

Miami-Dade police previously released the names of three people who were killed in the sudden midday collapse of the span, which was being installed to connect Florida International University to the City of Sweetwater. The victims were identified as Oswald Gonzalez, 57; Alberto Arias, 54; and Rolando Fraga Hernandez, 60.

Navarro Brown, 37, also was identified as a victim early Saturday, but police said he died at a hospital shortly after the accident.

Brown was an employee of Structural Technologies VSL, although it remained unclear what work he was doing on the bridge at the time of its collapse.

The first victim identified was Duran, who was a student at FIU. She died after the structure came crashing down on her vehicle.

In a tweet Friday, U.S. Sen. Marco Rubio, R-Fla., wrote that Duran's death "hits close to home," because she was studying political science -- which Rubio teaches at the university.

At Saturday's news conference, Rubio praising the NTSB investigation for already making progress in just 24 hours. He noted, however, that the investigation could last several months as it will examine the engineering of the bridge and the decisions made behind its construction.

“This was no easy task,” police director Perez said, referring to the recovery of the bodies. “Now we get into evidence-recovery mode and the investigation … We will continue to work hand-in-hand with the NTSB.”

In a statement Saturday, FIU President Mark Rosenberg said the university would hold a moment of silence at 1:47 p.m. Monday, coinciding with the time the bridge fell.

“I have met family members and friends of the victims. My heart goes out to them," Rosenberg wrote. "There is nothing I can say to ease their pain but we are putting our arms around them and doing everything in our power to support them. ... It will take time for our community to heal.”