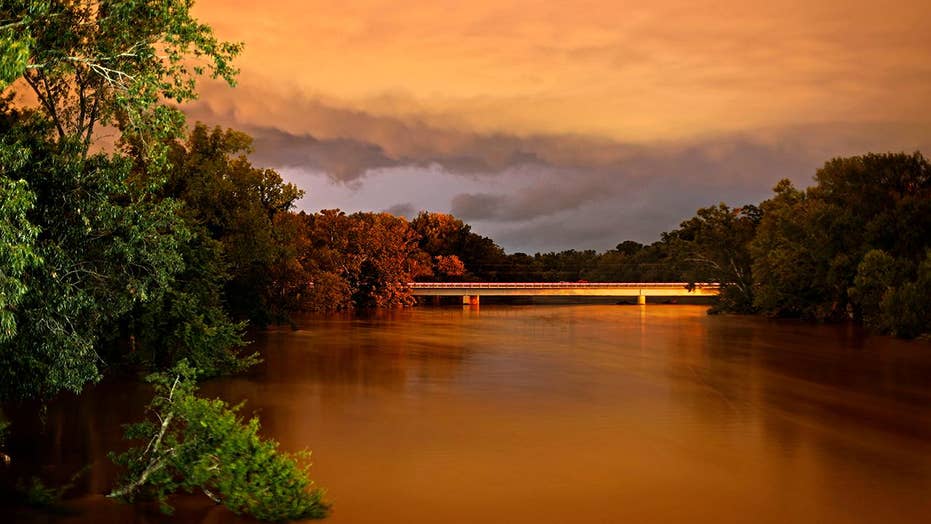 Florence has dropped more than 8 trillion gallons of water since making landfall last week in North Carolina, according to an unofficial estimate.

The National Weather Service in Raleigh said Tuesday morning an unofficial, radar-estimate of the total rainfall from the merciless hurricane-turned-tropical depression was about 8.04 trillion gallons of rain in the Tar Heel state.

The number was estimated using the average rainfall over the state and not actual gauge-measured amounts, the NWS said in a tweet.

Florence, a once powerful Category 4 hurricane, has claimed at least 32 lives across three states – 24 in North Carolina alone – and has left city after city inundated with upwards of 30 inches of rain in some areas.

The flooding unfolded just as forecasters predicted and more is expected as Florence makes its way slowly north, bringing with it more water to already drenched areas.

Federal and local officials have been monitoring the environmental implications of the excessive flooding, especially at the several open-air manure pits and coal ash landfills that were breached by flood waters.

Florence victims line up for ice in Wilmington, NC

Residents without power wait to pay for bags of ice; Rick Leventhal reports from the scene.

The U.S. Nuclear Regulatory Commission is also monitoring Duke Energy’s Brunswick nuclear power plant, which was in the direct path of Florence’s eye when it made landfall late last week.

A spokeswoman with Duke Energy told Fox News on Tuesday that the plant was safe and that floodwaters did not enter the facility. She said the plant’s two reactors remain shut down and they expect to restore power to all customers in North and South Carolina by late Sept. 26.

Shannon Brushe also pushed back at reports the Brunswick plant had been insulated because of the floods and damage caused by Florence. She said about 300 employees stayed at the plant during the storm to provide around-the-clock support, but that they were never stranded.

Water rescues under way in South Carolina after Florence

On Monday, it was reported the plant had been placed under an “unusual event” classification by the NRC – its lowest emergency classification – and that the plant itself had limited accessibility “by personal vehicles” because of floods and damage from the storm.

The News & Observer spoke to one of the “storm riders” at the plant, who said employees were sleeping on cots and using portable toilets because water had been shut off at the facility and toilets didn’t flush. The roads around the plants are largely impassable.

The Brunswick Nuclear Plant has declared an "unusual event" after floodwaters from Florence limited access to the facility. (Nuclear Regulatory Commission)

Brushe said there “no dire situation” at the plant and that all employees had planned to remain at the plant during the storm because of the potential of flooding. She said additional supplies was airlifted in after the storm and that a nearby Walmart opened its doors Monday.

“No one was expecting to go home that night,” she added.

NRC spokesman Joey Ledford told Fox News in an email Monday that the twin-reactor nuclear plant is stable and poses no threat to public safety. In a subsequent email on Tuesday morning, Ledford said the status at the plant had not changed overnight and that there continued to be limited access to the site due to flooding in the area.

Brushe said some of the workers who were at the nuclear plant during the storm have been able to leave. Those who lived nearby checked on their homes, while some crew replacements have been able to get to the plant.

About 30 miles north, a Duke Energy landfill in Wilmington holding potentially toxic coal ash suffered a breach. The company said about 2,000 cubic yards of coal ash flowed from its Sutton Plant near the Cape Fear river.

The Environmental Protection Agency called it a second breach, while the company said it’s all part of the same “erosion event.”

“The release of water and ash has stopped and its being repaired,” Brushe said.