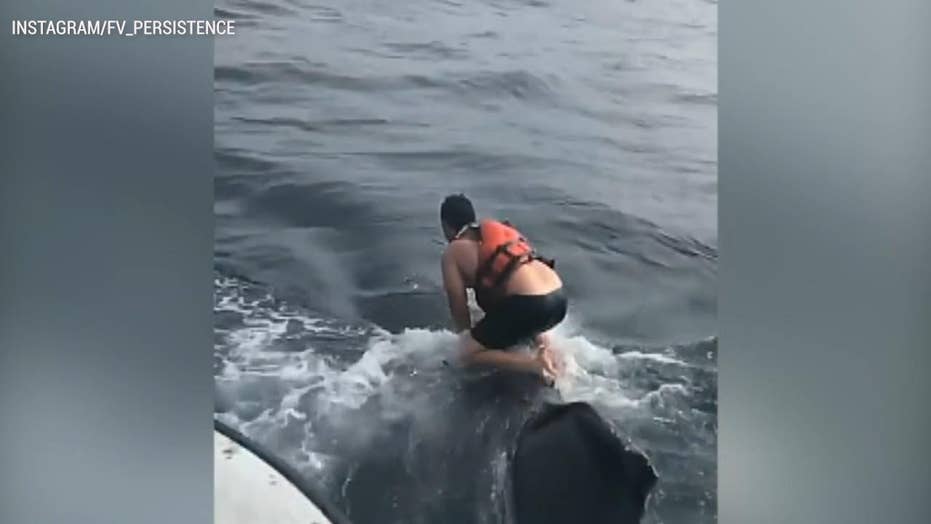 Fisherman jumps on humpback whale to free it from rope

Watch as a fisherman jumps on a humpback whale to free it from a rope.

A commercial fisherman jumped on a humpback whale off the Central California coast to free it from being entangled in a rope, reports said this week, citing a video capturing the event in September.

A rope was wrapped around the whale’s back and tail when Sam Synstelien jumped onto the mammal off Morro Bay, NBC Bay Area reported.

"(The whale) was just swimming in counter-clockwise circles," Nicholas Taron, the person who shot the video, told the station. "You could tell he was stressed and being held to the bottom."

The crew initially reported the problem to the Coast Guard, who “kind of finally said there’s nothing else you can do,” Taron said. He said he was told that the Coast Guard couldn't respond for hours, according to The San Francisco Chronicle.

The rope had a buoy attached to it -- which the crew cut off -- but it was still entangled. The whale was freed and Synstelien raised both arms after the effort.

But the Coast Guard said that the video is “a very dangerous example,” and could encourage others to attempt the response in the future, according to a statement obtained by the paper.

Authorized and trained responders have been killed while attempting to disentangle whales, the Coast Guard said.

"Best practice for dealing with an entangled whale is to never get into the water with it, as these animals are very powerful and dangerous in close proximity. In addition, every entangled whale is not necessarily in imminent danger, meaning that there is time to wait for the authorized responders and not requiring these types of emergency actions,” the agency said. “And cutting just the visible lines may not totally free the animal, making it harder for responders to help."

The National Oceanic and Atmospheric Administration’s Pacific Fisheries said the happy ending could’ve turned out much worse for the crew, according to NBC Bay Area.

"We’ve had people die trying to get in the water, and just last year, we lost one of our responders," spokesman Justin Veizbicke said. “Even though it seems like it’s a very stressful situation, we usually have days, weeks, sometimes even months to find these animals and get this gear off.”