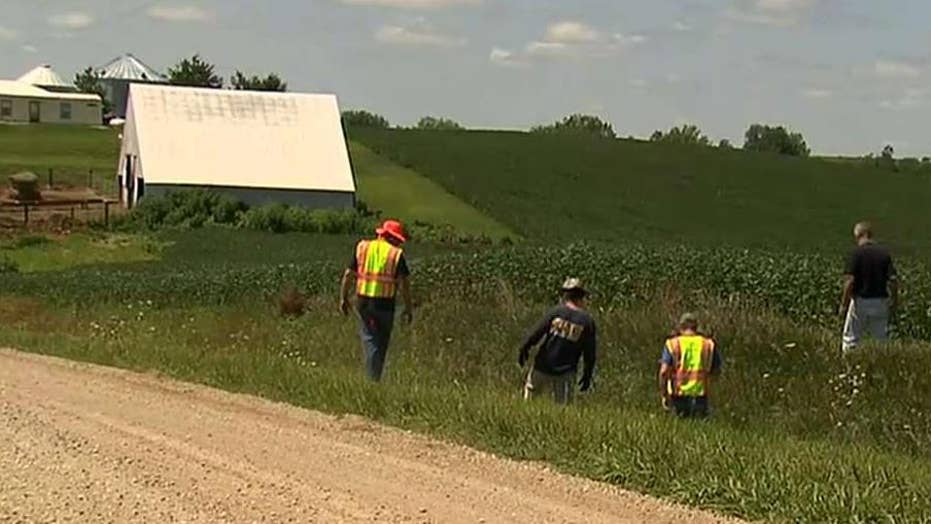 Farmer insists he has nothing to do with the 20-year-old student's disappearance; Matt Finn reports from Brooklyn, Iowa.

BROOKLYN, Iowa – The FBI returned to a pig farm to again question the owner in connection with the mysterious disappearance of 20-year-old Mollie Tibbetts, Fox News has learned.

An FBI agent was seen by Fox News arriving and speaking to Wayne Cheney for about five to 10 minutes Friday afternoon.

During an interview with Fox News, Cheney said he would allow the FBI to search his entire property; he expressed confidence that the bureau wouldn't find anything. So far, he said, the FBI has searched his home, some of his property and his cellphone.

He also told Fox News he has never seen Tibbetts before, because he doesn't venture into Brooklyn, Iowa, where she lives, several miles from his home.

With the FBI poised to return to his home Sunday, he said he doesn't know what to expect.

As for what the FBI has asked him about, his response was "I don't know." But he said he didn't think the FBI believes he's related to the woman's disappearance.

News of the FBI visit came as the reward for information leading to the missing woman’s whereabouts climbed to $260,000.

Cheney said of Tibbetts he had “no idea who she was” and said he suspects “some guy has her.”

Cheney also said that that law enforcement asked him Thursday to take a polygraph test and he refused.

He said the FBI agent told him he would return Sunday for more questioning.

Cheney is the pig farmer who told Fox News earlier that FBI investigators arrived at his home July 26 and asked to search his property without a warrant.

The investigators were there for nearly two hours, taking photos of the interior of the home and also searching his garage.

Cheney said investigators then asked to interview him away from the property and kept his cell phone overnight to check his records.

He has not been charged with a crime and said he “has nothing to hide.”

Cheney told local news station WHO-TV that he was quizzed by two investigators.

"I don't know who those two were but they took me down to the fire station Tuesday and questioned me for two hours,” he said. "I don’t remember what they asked me.”

He added: “I just thought it was a waste of time, but, oh well."

The station reported that, according to court records, Cheney pleaded guilty in two stalking cases -- one in Poweshiek County in 2009 and another in Marion County in 2014.

On Thursday, search teams scoured ditches near a pig farm that had been searched nearly a week ago after finding nearby a possible clue to her disappearance -- a red shirt.

MOLLIE TIBBETTS: FOX NEWS TAKES A LOOK AT THE LOCATION WHERE THE MISSING GIRL IS LAST THOUGHT TO HAVE BEEN

Tibbetts, a University of Iowa student, was last seen July 18 around 7:30 p.m. when she went out on a run. She was last seen wearing dark-colored running shorts, a pink sports top and running shoes, according to police.

Tibbetts’ boyfriend, Dalton Jack, said he received a Snapchat message from her at 10 p.m.

She had been staying at her boyfriend’s house in Brooklyn, Iowa, watching his dogs while he worked at a construction site almost 100 miles away.

The boyfriend is not a suspect, authorities have said.

Jack said in an exclusive interview Wednesday with Fox News Channel that he believes the doors of the home were left unlocked around the time of Tibbetts’ disappearance.

“It’s Brooklyn. You don’t lock your doors,” he said. “We lock our doors now. Every night.”

Laura Calderwood said during a news conference Thursday that she believes her daughter was alive but has potentially been kidnapped.

"If someone has abducted her, we are pleading with you to please release her," Calderwood said. "It is our greatest hope that if someone has her, that they would just release her and claim that money we have raised for her freedom."