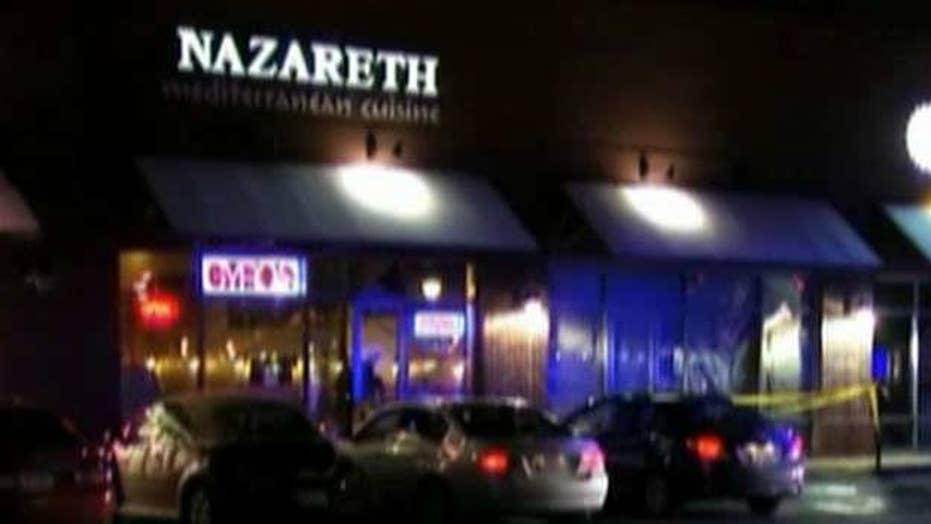 The FBI is investigating a machete attack Thursday night that turned a popular, Israeli-owned restaurant in Columbus, Ohio, into a bloodbath, but local police say there is no indication so far of a terror motive.

Of the four patrons wounded in the attack at the Nazareth Restaurant and Deli, one was in critical condition before being upgraded to “stable.” The attacker was identified as Mohammad Barry, a law enforcement source told Fox News.

"There's nothing to lead us to believe this is anything more than a random attack," Columbus police spokesman Sgt. Rich Weiner told the The Columbus Dispatch.

Weiner added that the FBI is also investigating the attack but declined say why.

A source told Fox News the FBI is scouring Barry's background, which includes interviewing associates and digging into his travel history. Fox is also told that investigators are looking into Barry's digital and online footprint for terrorist propaganda or evidence of communication extremists.

Police said the suspect walked into the restaurant around 5:30 p.m. and spoke with an employee before leaving. Local reports said he asked for the owner, but police did not confirm that. The suspect returned nearly 30 minutes later with machete in hand and attacked a couple, and then turned on diners who came to their aid, police said.

The suspect fled in a car, which was eventually stopped by cops, triggering the fatal encounter. According to local reports, as officers approached the man’s vehicle, he got out with a knife in one hand and the machete in the other. After an unsuccessful attempt to subdue the man with a Taser, he lunged towards cops forcing them to open fire.

Officials say the motivation for the man’s attack was unclear. Witnesses described a terrifying scene inside the restaurant.

“He looked straight at me, but he went over to the booths and just started going down the booths. It all seemed to happen in slow motion,” a waitress told WBNS.

“He came in and started beating up on another man, I thought it was a personal thing. Then he just started down the row hitting everybody; people were bleeding,” Karen Bass, a restaurant patron, told My Fox 28 Columbus.

Nazareth has been open for 20 years and is a popular spot for locals in the neighborhood, in which the owner is not for greeting customers with a baseball bat in attempt at lighthearted humor.

It was not clear if there was any political or racial motivation for the attack, but the Nazarath is known for its multiculturalism. The entrance is adorned with a small Israeli flag and the Arabic phrase, "Ahlan Wa Shalan" which translates to "You are my family, take it easy."