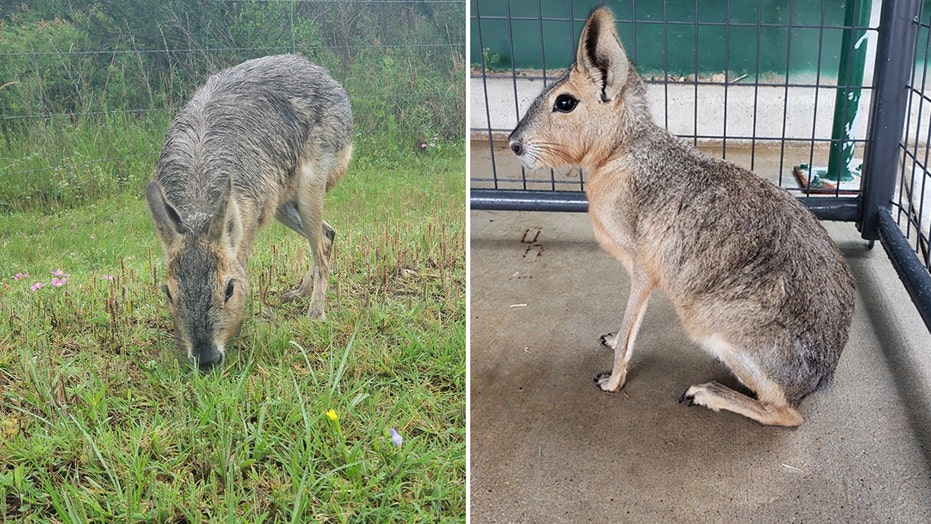 An exotic rodent native to South America was rescued along a highway in Texas last week, authorities said Monday.

A passerby saw the unusual animal on the side of the Grand Parkway in Harris County on Friday and helped deputies corral the critter, Harris County Constable Ted Heap said. Deputies identified the rabbit-like creature as a Patagonian mara, or Dillaby. It was missing from its owner for two days.

The Patagonian mara is an herbivorous rodent species native to Argentina, according to the Smithsonian’s National Zoo & Conversation Biology Institute. The animals mate for life and can live up to 14 years in human care. They have long legs with bodies that resemble hoofed animals, like deer.

Heap described the rescued animal as having “have small, compressed feet that make them resemble hooves from a distance and longer ears resembling those of a rabbit.” He said the animals like to dig, jump as high as seven feet and run extremely fast.

The pet, named "Jimmy," was cleaned up and returned to its owner, police said. (Harris County Constable Precinct 5)

Deputies took the missing pet, named Jimmy, to the Houston Humane Society, where it was cleaned up and determined to be healthy enough to return to its “relieved” owner, Heap said.

Patagonian maras average 27.5 inches in length and weigh between 17 and 35 pounds, according to the Smithsonian Institute.