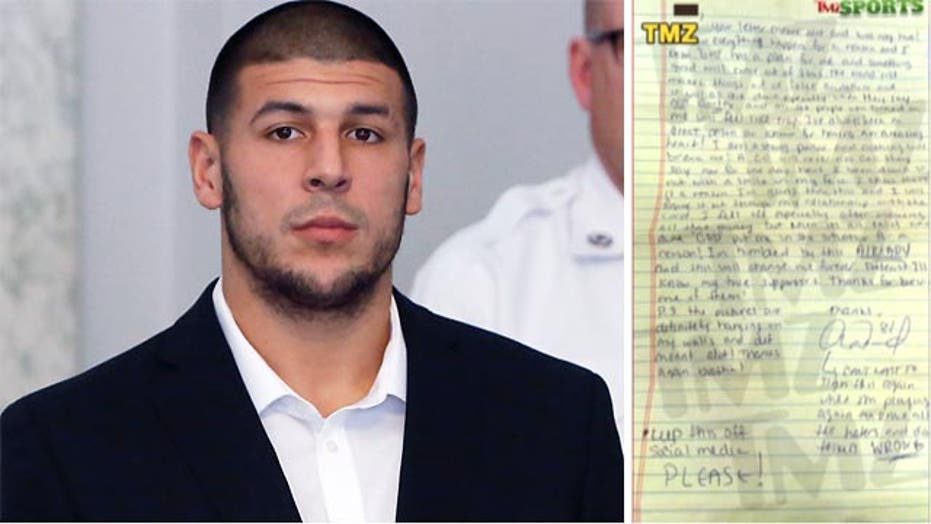 Aaron Hernandez playing the PR game from behind bars?

Former NFL star Aaron Hernandez maintains he is innocent and expects to make a comeback, according to a jailhouse letter he reportedly wrote to a fan following his arrest.

In the letter, which was obtained by TMZ, the former New England Patriots player who is charged with murder said he can't wait to sign autographs when he returns to the game.

"I know ‘God' has a plan for me and something good will come out of this…I've always been a great person an (sic) known for having an amazing heart," Hernandez reportedly wrote.

The letter, which TMZ said was verified with a law enforcement official, was sent to a fan named Karl, who said he contacted Hernandez because he was an inmate in the same jail 15 years ago.

Hernandez has pleaded not guilty to murder in the death of Odin Lloyd, a 27-year-old Boston semi-professional football player whose body was found June 17 about a mile from Hernandez's home in North Attleborough, Mass.

"Can't wait to sign this again when I'm playing again and prove all the haters and down talkers WRONG," Hernandez reportedly wrote following his signature.

Earlier this week, police divers conducted a two-day search in a lake in the Connecticut hometown of Hernandez.

Authorities have declined to comment on the search at Pine Lake, a 54-acre man-made lake in Bristol, except to confirm it is related to the Hernandez investigation.

Authorities believe Lloyd was killed with a .45-caliber Glock, which hasn't been recovered.

Divers spent eight hours Monday at the lake, which has an average depth of 4 1/2 feet and is 12 feet at its deepest point.