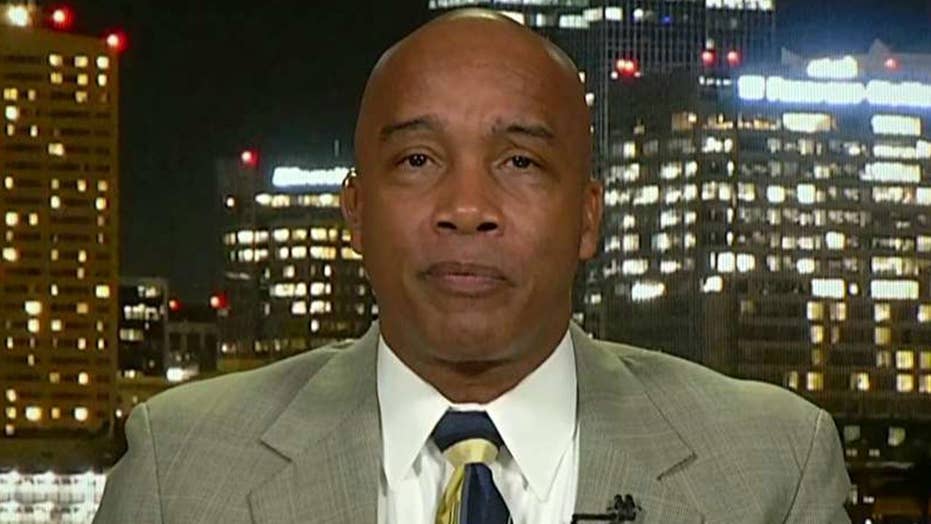 The Blacksphere executive director speaks out

Police in St. Louis are bracing Sunday for a third day of protests following the acquittal of a white former police officer in the fatal shooting of a black man.

A small group of protesters who refused to disperse Saturday night clashed with cops as protests turned violent for a second night in a row.

The protesters broke windows at dozens of businesses and threw objects at police, who moved in and made nine arrests. More than 30 protesters were arrested Friday.

“These types of incidents don’t help” in trying to prevent St. Louis’ issues, which include a shrinking population and businesses leaving the city, he said. “The root cause is that young black kids don’t have their fathers, their families.”

Saturday's confrontation took place in the Delmar Loop of the St. Louis suburb of University City -- known for concert venues, restaurants, shops and bars. The area had been the scene of a peaceful march earlier in the evening to protest a judge's ruling Friday clearing ex-Officer Jason Stockley of first-degree murder in the 2011 shooting of 24-year-old Anthony Lamar Smith. That march ended with organizers calling for people to leave and reconvene Sunday afternoon.

Organizers are planning to hold a "die in" on Sunday at 3 p.m. near St. Louis Police headquarters on Olive Street, the St. Louis Post-Dispatch reported.

But the small group that stayed behind drew hundreds of police in riot gear, who moved in and ordered them to leave.

A reporter for The Associated Press found at least half of the businesses on one side of the street with broken windows along a two block area.

Sam Thomas, who was helping his friend clean up the glass from the shattered windows of his business, OSO, a clothing and accessories boutique, said he understood why people were angry. The U.S. justice system is broken and needs to be fixed, Thomas said.

"I'm not saying this is the right way to fix it," he said of the damage.

"The window isn't murdered. Nobody is going to have a funeral for the window. We can replace it."

Earlier Saturday, demonstrations consisted mostly of marching and chanting through University City in a change from Friday evening’s violence, which saw 11 police officers injured – several by bricks tossed from the crowd – and the smashing of windows at the home of Mayor Lyda Krewson.

Krewson wasn’t home at the time, but family members were. She called the vandalism “irritating.”

“These are not the images we want to see of our city,” Krewson said at a news conference Saturday, the St. Louis Post-Dispatch reported. “We have some work to do here.”

Stockley’s trial came in the wake of the August 2014 shooting death of Michael Brown in nearby Ferguson, Mo., another police-involved death that sparked days of unrest in that town and elsewhere. The white officer in that case did not face charges.

Friday’s violence in St. Louis prompted the cancellation of concerts planned by rock band U2 on Saturday and singer Ed Sheeran on Sunday. Other events were postponed or canceled as well, the St. Louis Post-Dispatch reported.

Earlier Friday, FOX2 in St. Louis captured video of an elderly woman being knocked down and trampled by riot police. That woman, who was unidentified, was charged with "interfering," St. Louis police tweeted Saturday.

On Saturday, U2 frontman Bono issued a statement on Instagram about the cancellation and about the events transpiring in St. Louis, Variety reported.

“Deeply saddened at what has happened in St. Louis and having to cancel our show tonight,” Bono’s statement read. “I found myself reading Dr. King’s speech from the National Cathedral and asking myself is this 1968 or 2017?”

St. Louis police said 33 people were arrested in connection with Friday’s protests. In addition to the mayor’s home, there was also damage to two police vehicles, the St. Louis Public Library and 10 businesses in the city’s Central West End, police said.