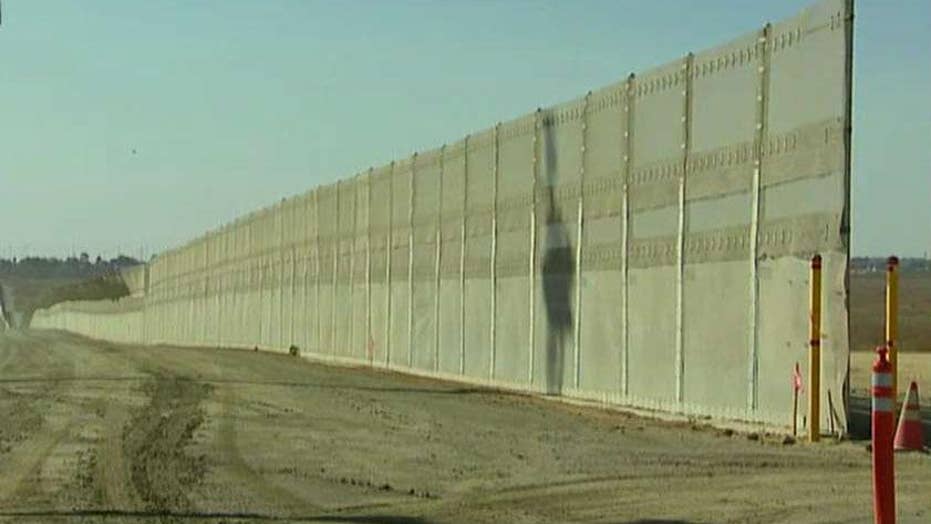 Rep. Chris Stewart: If Congress can produce a border security deal it will be 'a real surprise'

Democratic negotiations over a border wall have gone from no to 'hell no,' says Republican Congressman Chris Stewart from Utah.

About a dozen employees who are undocumented and worked at President Trump’s golf club in Westchester County, N.Y., for years say they were let go on Jan.18 because of their status, according to a report.

The workers were quoted by the Washington Post as saying they were called into a meeting with human resources executives who told them that an audit of their immigration documents indicated they were fraudulent. “Unfortunately, this means the club must end its employment relationship with you today,” the Post quoted what it described as a recording of the meeting that a worker made available.

FEDERAL EMPLOYEES RETURN TO WORK AFTER SHUTDOWN ENDS -- BUT FOR HOW LONG?

“I started to cry,” said Gabriel Sedano, a former maintenance worker from Mexico who worked for Trump since 2005. “I told them they needed to consider us. I had worked almost 15 years for them in this club, and I’d given the best of myself to this job.”

“I’d never done anything wrong, only work and work,” he added. “They said they didn't have any comments to make.”

The issue has drawn fire from people who say Trump broke his own rules on border security policy, as well as his emphasis on the importance of the rule of immigration law. The firings at the Trump National Golf Club came amid the country’s longest-ever shutdown over disputes with Democrats on funding for a border wall.

Among Trump’s businesses are 16 golf courses and 11 hotels in various countries. His sons, Donald, Jr. and Eric, run them.

Eric Trump said via an email statement quoted in the Post: “We are making a broad effort to identify any employee who has given false and fraudulent documents to unlawfully gain employment. Where identified, any individual will be terminated immediately.”

“My father is fighting so hard for immigration reform. The system is broken.”

The fired workers told the Post the documents deemed fraudulent were the same the golf club had accepted in previous years.

It didn’t matter. They didn’t care [about immigration status]. It was, ‘Get the cheapest labor possible.’

The Post said Eric Trump had ignored questions the newspaper asked about the number of undocumented immigrants Trump properties had fired elsewhere, and whether such audits had been conducted before. He also did not address whether those running the properties had known some workers were undocumented.

The Post said the workers they interviewed, with the help of attorney Anibal Romero, provided pay stubs as well as awards they had won at the company for their performance on the job. Romero also represents undocumented workers who were on the payroll at Trump’s club in New Jersey.

The Trump Organization is guilty of “a pattern and practice of hiring undocumented immigrants, not only in New Jersey, but also in New York…We are demanding a full and thorough investigation from federal authorities,” Romero said.

Most of the workers are from Mexico and bought phony documents in Queens, the newspaper said.

One worker, Edmundo Morocho, from Ecuador, said he started working at the golf course about 20 years ago, after showing a green card and Social Security card he bought.

After the green card expired in 2002, he bought another one that had different information from the first one. But that wasn't flagged by the club, he said.

We are making a broad effort to identify any employee who has given false and fraudulent documents to unlawfully gain employment. Where identified, any individual will be terminated immediately...My father is fighting so hard for immigration reform. The system is broken.

When a document did raise questions in the case of at least one worker, Jesus Lira, the solution suggested by a manager was that he should get better documented. “She said, ‘I can’t accept this, go back and tell them to do a better job,’ ” Lira said, adding that he did just that.

The Post said it spoke to former Trump managers, who were not identified. One said the organization rejected about 20 percent of job applicants because of immigration red flags. The other manager said it was more important for the Trump Organization to get cheap, rather than legal, workers.

“It didn’t matter. They didn’t care [about immigration status],” said the former manager, according to the Post.  “It was, ‘Get the cheapest labor possible.’ ”

The attorney general's office declined to comment, according to the Daily News, which quoted Romero, the attorney also representing the fired workers in New York, as saying that the state's top cop's office had reached out to him for details about allegations that five of the workers he represented often endured slurs while working at the Trump National Golf Club in Bedminster.