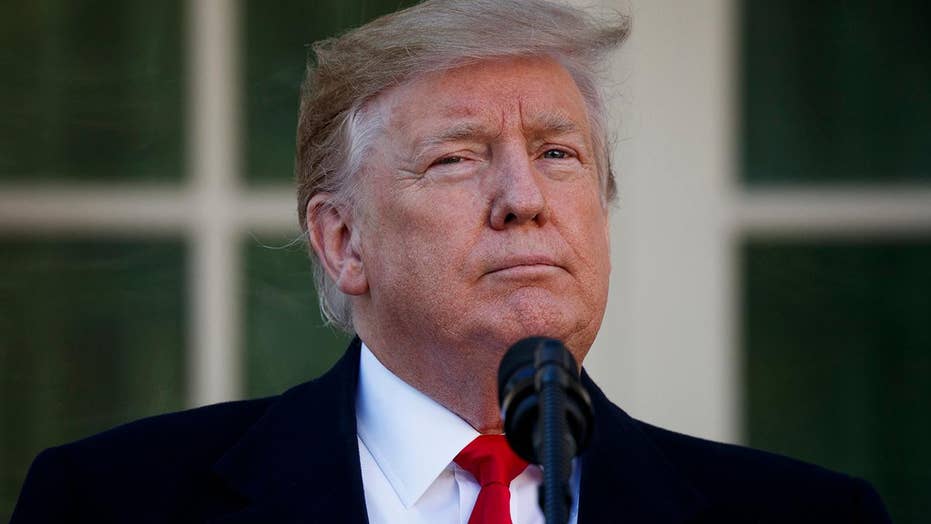 Can President Trump legally use executive order to build the border wall?

Constitutional law attorney Jenna Ellis weighs in on whether or not Trump can legally declare a national emergency to build the border wall.

Hundreds of thousands of federal employees returned to work Monday morning after missing paychecks for more than a month during the longest-ever government shutdown -- but fears of another shutdown loom as the White House and Congress appear no closer to a long-term funding deal despite giving themselves breathing room to negotiate.

After roughly 800,000 government workers and contractors were either furloughed or told to work without pay for 35 days, the president agreed Friday to back a three-week spending package, enough to resume government operations through Feb. 15.

On Monday, Smithsonian museums that were closed during the partial shutdown prepared to reopen this week, as did national parks and other affected federal sites. Numerous federal departments, including Homeland Security which saw significant disruptions in agencies such as the Transportation Security Administration, were back in full force.

For Democrats, they got what they wanted in the short-term -- an end to the shutdown which had federal workers feeling the pinch and was beginning to affect the broader public, especially at America's airports. During the funding lapse, some federal workers had to apply for unemployment benefits and take out loans to stay afloat. Statistics provided by the Department of Labor showed that 4,760 federal employees filed for unemployment benefits in the last week of December—days after the shutdown began on Dec. 22.

The Trump administration has said federal employees should receive their paychecks by the end of this week, and a law signed by the president earlier this month guaranteed back pay for federal workers who had been forced to work without pay or been furloughed.

But the stopgap measure signed by Trump does not include his sought-after funding for a border wall -- a sticking point that could lead to a new standoff by the middle of February.

While the government gets back to business, the president and senior administration officials already are casting doubt on the possibility a potential bipartisan agreement, suggesting there was a slim chance that any congressional proposal would include the $5.7 billion he requested for a wall along the U.S.-Mexico border, especially before Feb. 15.

Another deadlock would create the possibility of another partial shutdown -- or a national emergency declaration by Trump in order to pursue the border wall's construction.

Acting White House Chief of Staff Mick Mulvaney, on CBS News’ “Face the Nation” on Sunday, said he thought Trump is prepared to wage another shutdown fight over the wall.

“This is a serious humanitarian and security crisis,” Mulvaney said. “And, as president of the United States, [Trump] takes the security of the nation as his highest priority.”

But Democrats blasted the president’s use of a shutdown, with Rep. Hakeem Jeffries, D-N.Y., saying that shutdowns “are not legitimate negotiating tactics when there’s a public policy disagreement between two branches of government.”

Mulvaney did say, however, that the “right way” to fund the wall would be through legislation passed by Congress.

“But at the end of the day, the president is going to secure the border one way or another,” Mulvaney said on “Fox News Sunday.”

Senate Minority Leader Chuck Schumer, D-N.Y., on Friday urged the president to separate the issue of border security from funding of the government.

“The solution to this impasse was to separate funding for the government and border security,” Schumer said last week. “Democrats in the Senate and House were united on this position through the shutdown.”

Senate Majority Leader Mitch McConnell, R-Ky., said last week that he supported Trump’s move to re-open the government, but called on Senate Democrats to come to the table and negotiate a border security plan before Feb. 15.

“I hope Democrats will stay true to the commitment they have stated constantly over the past weeks—that once government was re-opened, they would be perfectly willing to negotiate in good faith on full-year government funding that would include a significant investment in urgently needed border security measures, including physical barriers,” McConnell said.

Despite the president’s desire to work with Democrats on a border security plan, he has not ruled out declaring a national emergency over the “humanitarian crisis” at the border.

And the president, early Monday, touted his accomplishments thus far, again promising the construction of a wall.

“After all that I have done for the Military, our great Veterans, Judges (99), Justices (2), Tax & Regulation Cuts, the Economy, Energy, Trade & MUCH MORE, does anybody really think I won’t build the WALL? Done more in first two years than any President! MAKE AMERICA GREAT AGAIN!” Trump tweeted early Monday.