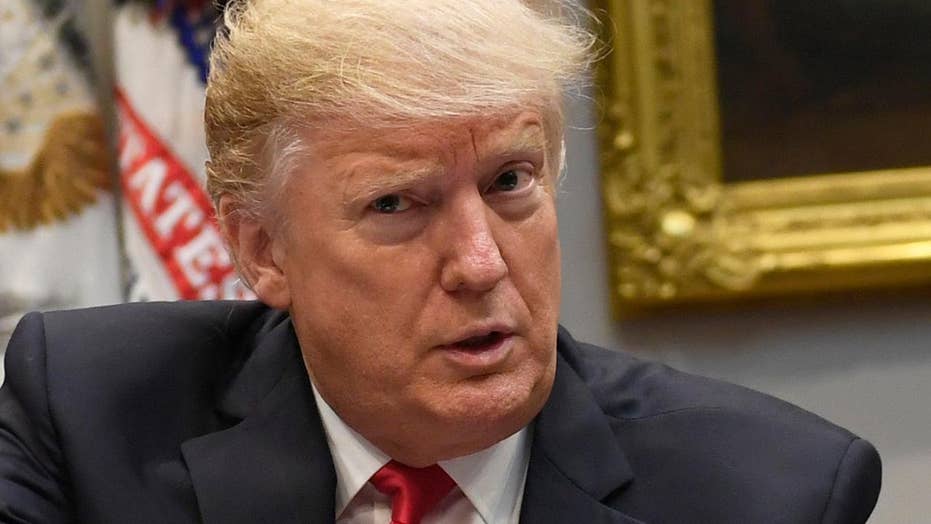 President Trump said Sunday he doubted he could accept any agreement struck by congressional negotiators that would give him less than his requested $5.7 billion for a wall along the U.S.-Mexico border as White House officials dangled the possibility of another partial shutdown next month.

The president also cast doubt on the prospect of lawmakers reaching any agreement before funding for most government agencies runs out on Feb. 15, telling The Wall Street Journal: "I personally think it’s less than 50-50, but you have a lot of very good people on that board."

On Friday, Trump signed legislation ending the 35-day shutdown without any funding for his long-promised border barrier, a reversal from last month when he refused to sign any funding legislation that did not provide wall money.

Mick Mulvaney on the political fallout from the government shutdown fight

"I have to do it right," Trump insisted to the Journal on Sunday, adding that another partial shutdown was "certainly an option." The president also cast doubt on any deal that would trade wall funding for increased protections or citizenship for Dreamers, a group of immigrants brought to the U.S. illegally as children, calling it "a separate subject to be taken up at a separate time."

When asked on CBS News' "Face The Nation" if Trump was prepared to wage another shutdown fight over the wall, acting White House Chief of Staff Mick Mulvaney answered: "Yeah, I think he actually is."

"This is a serious humanitarian and security crisis," Mulvaney said. "And, as president of the United States, [Trump] takes the security of the nation as his highest priority."

Appearing on "Fox News Sunday," Mulvaney said "the right way" to fund the wall would be through legislation passed by Congress.

"But at the end of the day," he added, "the president is going to secure the border one way or another."

The White House has directed the Army Corps of Engineers to "look at possible ways of funding border security," including possibly using the president's emergency powers and unspent disaster relief money.

"I think the president wants his $5.7 billion," Mulvaney said. "Keep in mind –  why is that number? It’s not a number that’s made up. It’s what the experts have told him. He’s listened to DHS. I’ve been in on the meetings. He’s listened to CBP [Customs and Border Patrol], he’s listened to ICE."

Rep. Hakeem Jeffries of New York, a member of the Democratic leadership in the House, said his colleagues are looking for "evidence-based" legislation.

"Shutdowns are not legitimate negotiating tactics when there's a public policy disagreement between two branches of government," he told NBC News' "Meet The Press." House Speaker Nancy Pelosi, D-Calif., has said repeatedly that congressional Democrats would not support any legislation that finances the wall.

The president kept up the case for the wall on social media, tweeting: "BUILD A WALL & CRIME WILL FALL!" On Sunday morning, he pegged the number of illegal immigrants at "25,772,342 ... not the 11,000,000 that have been reported for years." Trump also tweeted that the cost of illegal immigration so far this year was nearly $19 billion. He did not cite a source for either figure.

"I'm not exactly sure where the President got that number this morning," Mulvaney told "Face The Nation." "But I think what you see him trying to do is point out how silly this debate is. This is not that much money in the greater scheme of things the United States of America ... This should have been resolved a long time ago, and we do hope it gets resolved in the next twenty-one days."

Fox News' Gregg Re, John Roberts and The Associated Press contributed to this report.