However, the number of confirmed tornadoes won't be known until National Weather Service meteorologists are able to assess the destruction.

In the town of Kingston, some Oklahoma outlets reported that the presumed twister's path was potentially a quarter-mile wide, with Twitter users sharing photos at the scene.

There have been no reported deaths, although images show homes wrestled down to their foundations, debris and vehicles that had been flipped over.

A video, supposedly taken in the tornado, showed a truck flipped completely over before it miraculously drove off.

Omg… just going thru my video. This is a story about a red truck and a tornado…. I CANNOT believe they drove away like that. #txwx #tornado pic.twitter.com/8h0nD88xFv

Oklahoma City's FOX 25, citing the Oklahoma Department of Transportation, reported that the US-70 had been shut down between the SH-32 Junction and that the Roosevelt Bridge over Lake Texoma was also closed.

In Texas, several tornadoes were reported Monday along the Interstate 35 corridor and officials there said at least four people were injured there. A majority of central Texas was under a tornado watch until 1 a.m. Tuesday.

Social media posts from Jacksboro captured when a storm ripped the wall and roof from parts of Jacksboro High School. 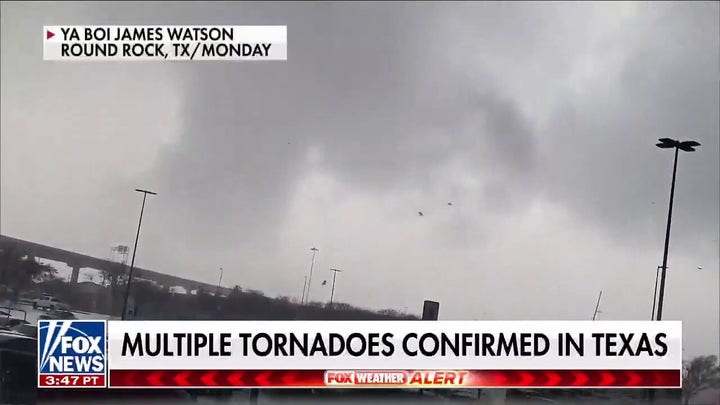 A large tornado was seen in Taylor, while multiple tornados were seen in Williamson County. Homes, cars and buildings were damaged, Fox 7 Austin reported.

Gov. Greg Abbott told reporters Monday night that he was grateful that there were no reports of fatalities.

"We know there are many people whose lives have been completely disrupted and people who’ve lost their homes," he said. "At the very same time ... it may be a miracle also, because even though there’s been some devastating physical damage, to my knowledge, as of right now, there is no report of loss of life, which is just stunning."

By Tuesday morning, the system was bringing heavy rainfall and thunderstorms to parts of the Lonestar State and Arkansas.

The storm was poised to move into Louisiana and Mississippi on Tuesday.