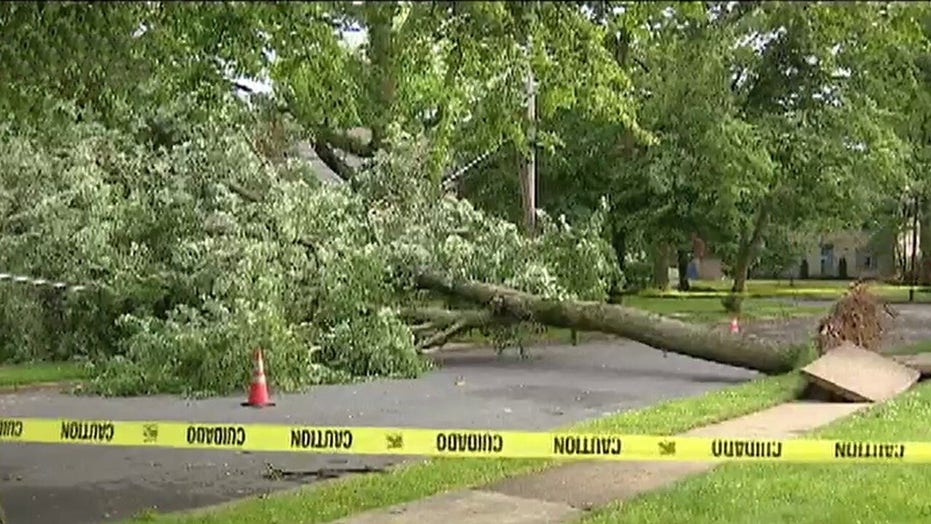 Four people were killed and more than a half-million customers were without power after a powerful line of severe thunderstorms known as a derecho slammed eastern Pennsylvania and New Jersey on Wednesday.

The National Weather Service (NWS) office in Mount Holly, N.J., said that the Storm Prediction Center (SPC) confirmed an intense line of storms that tracked through the region was a derecho.

The storms that slammed eastern Pennsylvania and New Jersey traveled some 300 miles on Wednesday and brought hurricane-force wind gusts of 89 mph in Beach Haven on New Jersey's Long Beach Island and 87 mph in Brick, according to the NWS Eastern Region.

Forecasters said there were over 250 reports of wind damage and severe wind gusts across the region.

Storm reports from the SPC also showed that four people died in separate incidents from the storms.

Three of the deaths were in Montgomery County, Pa., where two people were killed when trees fell on their cars. The third individual was killed after a tree crashed through the roof of a building at the Philmont Country Club.

In neighboring Delaware County, a tree fell on a power line that then fell on a house, causing a house fire that killed one person.

Immediately after the storms, more than a half-million customers were without power in both states. The power-outage tracking website poweroutage.us said as of Thursday morning there were at least 208,684 outages in Pennslyvania, mostly concentrated in the southeast corner of the state. In neighboring New Jersey, 112,065 outages were reported.

In Lansdale, located north of Philadelphia, the strong winds caused the roof to partially collapse at an apartment complex.

"It ripped the roof right off the corner of the building behind me," Fairmount Fire Company Chief Joe Stockert told FOX29. "We had 150 residents we had to evacuate 'cause the building is uninhabitable right now."

Strong to severe storms are possible again on Thursday for portions of the MidAtlantic and Northeast including Philadelphia and DC back through the Central Plains and Midwest.

The threat for severe weather on Thursday, including areas that were hit by a derecho in Pennsylvania. (Fox News)

Once again large hail, damaging winds, and tornadoes will be possible in these areas.