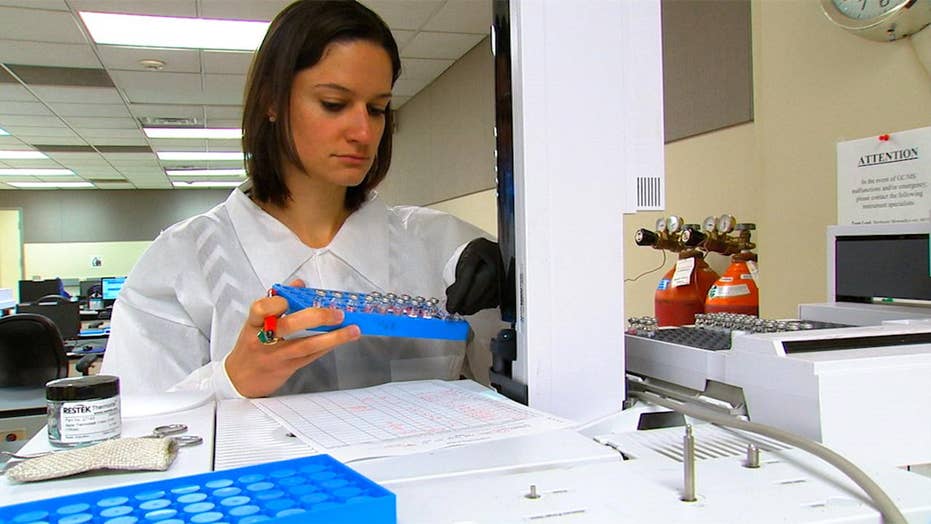 Drug analysis cases are overwhelming crime labs across the country, including agencies in Georgia, Mississippi, Arkansas and Ohio.

ATLANTA – “Grind it, dissolve it, mix it up,” scientist Karlie McManaman described, as she ran through the same routine she’s performed for six years at the Georgia Bureau of Investigation – analyzing drugs.

But in recent months, longer, busier days in the lab are becoming the norm for McManaman, as a mounting workload literally piles up behind her.

Thousands of drug cases hang in the balance at GBI; its backlog jumped from 316 requests to 17,285 in five years – all awhile, the number of new submissions remaining consistent, hovering in the low 30,000s. A case qualifies as a backlog when it is more than 30 days old.

But problems with the backlog extend beyond an escalating workload for employees at the GBI. President of the Prosecuting Attorneys’ Council of Georgia, Peter Skandalakis, said district attorneys across the state see drug abusers and dealers returning to the streets because of the delay in analysis.

"In today’s world, forensic evidence is more important than it’s ever been before."

DR. MARC SIEGEL: THE OPIOID CRISIS HAS A SOLUTION - HERE IT IS

Right now, drug analysis in Georgia typically takes seven to nine months. Indictment must take place within 90 days in Georgia (even shorter in other states) before suspects have a right to bond.

“So these guys get arrested, we’re waiting on the drug tests to get back, they get a bond, they go back out, they’re at the same street corner selling drugs again,” said David Cooke, district attorney in Macon-Bibb County.

This is just one of several dangerous consequences from the backlog Cooke listed.

As of several months ago, the GBI only analyzes primary drugs in evidence submitted (unless a special request is made), in an effort to reduce the backlog.

Cooke said this limits prosecutors’ ability to demonstrate someone has “possession with the intent to distribute” – in other words, that an individual is not just a drug user but also a seller.

“We want to show that they’re carrying around a pharmacy with them,” he said.

Cooke started noticing the widespread effects one year ago, noting how even a judge asked him: “Hey, how come I’m not getting as many drug cases as I used to?”

Georgia is not alone. Drug cases are overwhelming crime labs across the country, including agencies in Mississippi, Arkansas and Ohio – each responding with different solutions.

Though not quite as steep as Georgia’s backlog, Mississippi’s pending analysis cases jumped by 2,200 over the past five years.

Howell said it’s all a matter of funding. “Every state agency is fighting to stay alive in some respect,” he added.

Sen. Sherrod Brown, D-Ohio, points to technological enhancements as a means to improve backlogs nationwide. He is pushing to put high-tech screening devices, already used by customs agents, into the hands of local police.

“The technology is such now that these devices…will be able to detect, pretty much immediately, a number of different substances – some toxic, some not, some legal, some not,” Brown told Fox News.

He argued these devices, referenced in his proposed Power Act, would give officers instant results, immediately providing leads and signaling whether further information is needed from a lab.

Keenan has a different approach. He applauded GBI’s “excellent facilities for the scientists to work in,” and then said, “What we need is scientists.”

He pointed to the constantly evolving black market science.

“Many of them are synthetic drugs, new synthetic drugs we’ve never seen before that the crime lab has to develop analysis to be able to determine exactly what is there,” Keenan explained.

While cases come in to the GBI at a steady rate, combination drugs, such as heroin mixed with fentanyl, require more time to be analyzed, so the backlog grows.

District attorneys like Cooke plan on lobbying for additional funding for the GBI’s drug analysis sector, and it appears odds are in the GBI’s favor.

For the first time in his administration, Governor Nathan Deal is allowing agencies to ask for up to two percent more in spending.

Keenan confirmed the GBI will be requesting additional funding to hire more drug analysis scientists in its next needs assessment.

“In today’s world, forensic evidence is more important than it’s ever been before,” Keenan said. “Judges and juries expect to see crime lab evidence and analysis in the courtroom. [Cases] can’t go forward until a crime lab completes its work. [The backlog] creates turmoil in the criminal justice system.”

Emilie Ikeda joined Fox News in 2017 as multimedia reporter based in Atlanta.
ADVERTISEMENT