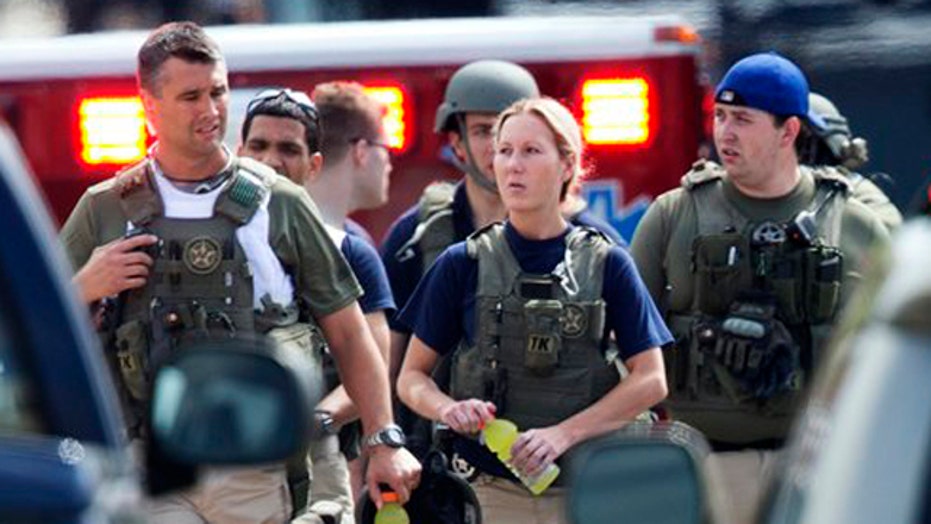 Navy veteran Aaron Alexis, who killed 12 people at a Navy building in Washington Monday morning, had been suffering a host of serious mental issues, including paranoia and a sleep disorder, law enforcement officials told the Associated Press.

Alexis had been hearing voices in his head and had been treated since August by the Veterans Administration for his mental problems, the officials said. They spoke on condition of anonymity because the criminal investigation in the case was continuing.

Alexis, 34, was discharged from the Navy two years ago after serving hitches in Texas and Illinois.

He was reportedly armed with a shotgun and two handguns. Alexis sprayed bullets from the fourth floor down to the cafeteria area in the Naval Sea Systems Command headquarters in southeast Washington.

The attack began just after 8 a.m. Alexis died later as he traded shots with responding police, although it was unclear if he killed himself or was brought down by cops.

He most likely gained entry into the facility with a CAC card, or a common access card. The system does not require workers to pass through a metal detector and usually only requires employees to show the card. Senior military officials tell Fox News that he most likely shot his way into building 197, because that building requires a separate pass he did not have.

Washington Mayor Vincent Gray said there was still no motive for the shootings and no indication of terrorism "although we haven't ruled that out."

While some neighbors and acquaintances described him as "nice," his father once told detectives in Seattle that his son had anger management problems related to post-traumatic stress brought on by the terrorist attacks of Sept. 11, 2001. He also complained about the Navy and being a victim of discrimination.

The former Navy reservist had a string of misconduct problems during his nearly three years in the military, but he received an honorable discharge.

The officials say Alexis had bouts of insubordination, disorderly conduct and was sometimes absent from work without authorization. The offenses occurred mainly when he was serving in Fort Worth, Texas, from 2008-2011, and were enough to prompt Navy officials to grant him an early discharge through a special program for enlisted personnel.

Officials said the bad conduct was enough to make it clear Alexis would not be a good sailor, but not enough to warrant a general or less-than-honorable discharge.

Late Monday, police searched a Residence Inn hotel in Southwest Washington, where Alexis had been staying for at least two days prior to the shooting. WRC reported  that he had been staying with a group of five other civilian contractors, four of whom had been interviewed by police. The station also reported that Alexis' rental car had been found near the scene of the shooting and authorities were working on obtaining a search warrant for the vehicle.

In New York, the FBI interviewed Alexis's mother at her home in the Bedford-Stuyvesant section of Brooklyn.

In Fort Worth, Texas, where Alexis lived for part of his Navy stint, those who knew, or claimed to know the gunman put forth their own theories. One told the Fort Worth Star-Telegram  that Alexis was upset with the government because of a dispute over benefits. Another acquaintance told The Associated Press that Alexis would complain about being a victim of discrimination.

That acquaintance, Oui Suthametewakul, said Alexis lived with him and his wife from August 2012 to May 2013 in Fort Worth, but that they had to part ways because he wasn't paying his bills.

Others expressed wonder that Alexis would be linked with such a crime at all.

"Oh boy, I can’t believe this," Somsak Srisan, Alexis' former landlord, told the newspaper. "He was always very polite to me."

After leaving the naval reserves, Alexis worked as a waiter and delivery driver at the Happy Bowl Thai restaurant in White Settlement, a suburb of Fort Worth. A convert to Buddhism who had visited Thailand in the past, Alexis was able to converse with Thai customers in their native language and made several friends in the local Thai community.

Hewlett-Packard issued a statement Monday saying that at the time of the shootings, Alexis worked for The Experts, a subcontractor on an HP Enterprise Services contract to refresh equipment used on the Navy Marine Corps Intranet network. The FBI said he had legitimate access to the Navy Yard "as a result of his work as a contractor."

Gray said those killed ranged in age from 46 to 73. Eight others were injured — three by gunshots and the other five by non-shooting causes like stress and falls.

Throughout the morning and early afternoon, helicopters circled above the sprawling complex. People still trapped inside the building, where some 3,000 work every day, were told to "shelter in place," as helicopters dropped baskets to pick up the wounded.

Alexis, of New York, was a Navy aviation electrician's mate, third class, who spent time in Texas and Illinois before leaving the Navy in early 2011. It was unclear why he left or if he was voluntarily discharged. He had a "history of misconduct," a senior defense official told Fox News.

While stationed in Fort Worth, he was arrested on Sept. 4, 2010, after an upstairs neighbor reported that he had fired shots up into her apartment.The neighbor said Alexis had often angrily confronted her about making too much noise, and she told police he scared her.

"[The neighbor] told me that she is terrified of Aaron and feels that this was done intentionally," the arresting officer wrote on the police report.

In 2004, Alexis was arrested in Seattle for shooting out the tires of a construction worker's car in an incident he later described as "an anger-fueled blackout."

He also told Seattle police he had witnessed the Sept. 11, 2001, terrorist attacks and "how these events had disturbed him," according to a police report.

Alexis' father told police in 2004 his son had participated in rescue efforts during 9/11 and had suffered post traumatic stress disorder, which could not be independently confirmed.