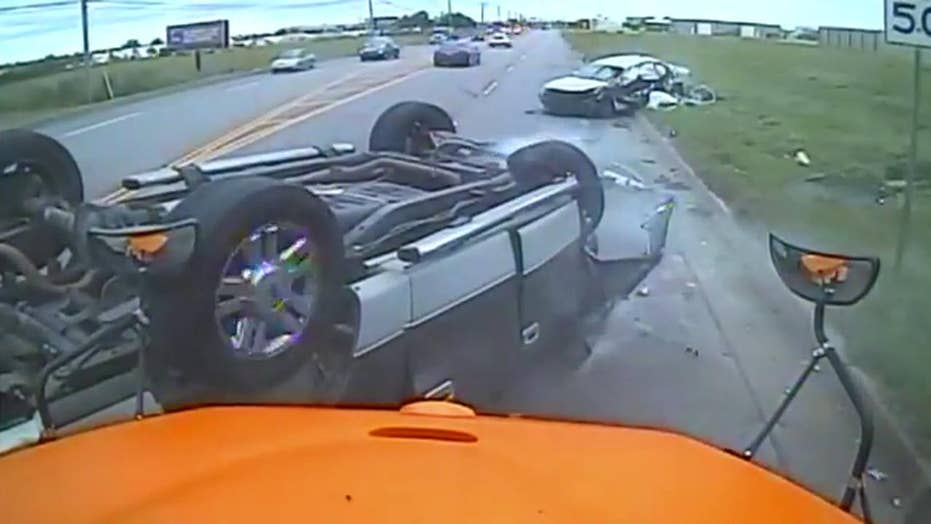 Raw video: Truck flips after veering into lane and smashing into car in Oklahoma

Footage of a school bus dashcam shows the moment a vehicle packed with children narrowly missed a major crash.

The video, captured last Wednesday in Oklahoma City, shows a car moving into the right lane as a truck driving in the opposite direction suddenly crosses into oncoming traffic. The vehicles crash, the truck flips and then it slides toward the school bus – stopping just as it slightly hits the school bus.

"Sit down, you guys," a voice inside the bus could be heard saying in the video.

Three people were in critical condition, but the 19 students riding the bus weren't hurt, according to Fox 25.

School district officials lauded the bus driver for remaining composed while the frightening scene unfolded in front of her.

"She was so calm under such frightening circumstances and we are just very, very proud of the way that she handled herself," Edmond Public Schools Public Information Officer Susan Parks-Schlepp said of the bus driver. "She remained calm, she called authorities, she told kids to sit down on the bus. I'm not sure any of us would have been that calm under those circumstances."