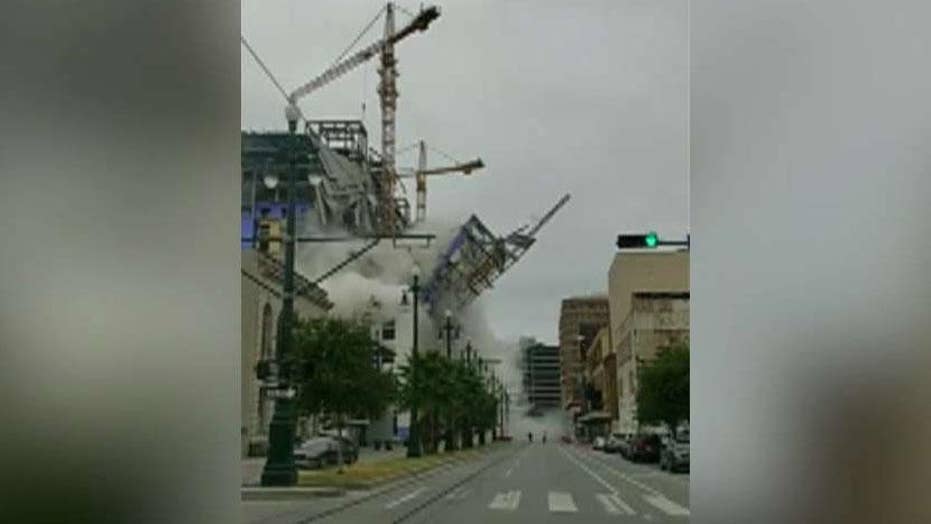 Three people are unaccounted for and one person is dead after a Hard Rock Hotel in New Orleans, Louisiana being built partially collapsed.

Rescue crews in New Orleans were still searching for a missing worker in the area where a Hard Rock Hotel and Casino building under construction partially collapsed over the weekend, voicing concern about two heavily damaged cranes that were in danger of falling down, officials said Monday.

"We're still in rescue mode," said New Orleans Fire Chief Timothy McConnell during a news conference. "Our teams are once again, they're back in the building for the fifth time today. We think we're close to an area" where the missing person might be, but "we do not have confirmation."

McConnell said the evacuation zone was slighted widened in response to the vulnerable cranes, as workers continue to move with search dogs through the unstable structure.

"The crane that looks damaged, we've known about," he told reporters. "The engineers determined that the other crane is just as risky."

Collin Arnold, the city's Homeland Security director, said experts have been called in to help stabilize the structure and cranes.

"These cranes are both in a bad situation," he said. "We have great minds here and a lot of equipment coming in. It's just going to be a matter of time before we can figure out a game plan."

At least 30 people were hospitalized and two people were killed after Saturday's collapse. More than 100 people were working on the construction site near the French Quarter when the building gave way.

A rescued worker, left, and a firefighter look back at the damaged building after a large portion of a hotel under construction suddenly collapsed in New Orleans on Saturday. (Scott Threlkeld/The Advocate via AP)

Large sections of the area near the damaged site remained closed to pedestrian and vehicle traffic. Mayor LaToya Cantrell said utilities were cut off to nine major businesses in the area and 37 families have been put up at hotels.

She said the city will cooperate with an Occupational Health and Safety Administration (OHSA) investigation into what went wrong.

"We're going to be as cooperative as necessary, to the fullest extent," Cantrell said Monday.